Commitment to The Uluru Statement

The Uluru Statement from the Heart and the Final Report of the Referendum Council provide a picture of the change needed to build a better future for both Indigenous people and the Nation. That picture includes a ‘voice to Parliament’, that would empower Indigenous people to influence laws and policies that affect them directly; and truth telling and Makarrata to heal the country, and build a bridge from a turbulent past to a positive and cohesive future. 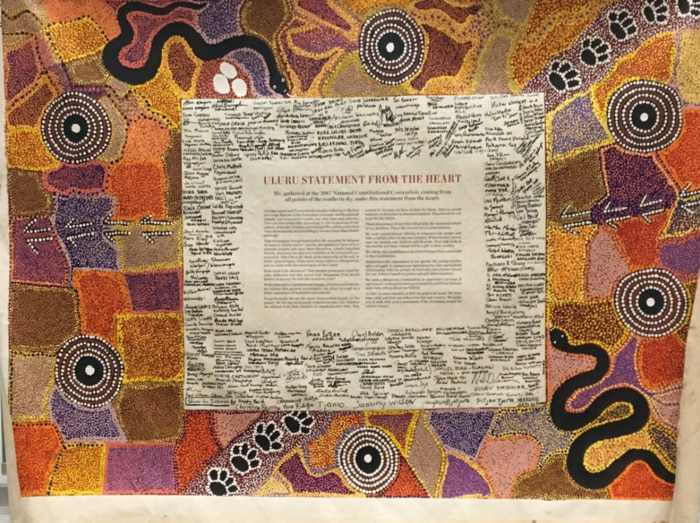 To make a submission to the Co-design Inquiry Committee, click https://haveyoursay.voice.niaa.gov.au/.

A helpful website on how to make the submission is https://fromtheheart.com.au/

Below is some information we have put together to help you make a submission:

Why change is needed

With substantive constitutional change and structural reform, we believe this ancient sovereignty can shine through as a fuller expression of Australia’s nationhood.

Uluru Statement from the Heart

127 years ago Sir Henry Parkes and a team of men set sail from Brooklyn to begin work on a constitution for a new federation. They drafted a Constitution that did not recognise the peoples who have lived in Australia for millennia. The only mention of Aboriginal and Torres Strait Islander peoples in the Constitution was of exclusion. Aboriginal people were seen as a "dying race" not expected to survive British settlement.

Racism is entrenched in the Australian Constitution. We cannot move forward as a country until we honestly address the truth of our history, and this includes amending those elements of the Constitution that embody this racist past.

For the first six decades of our democracy - until 1962 - Indigenous Australians could not vote federally, and were excluded even from being counted as citizens until the 1967 Referendum.

"The 1967 referendum deleted discriminatory references specific to Aboriginal people, but put nothing in their place. Torres Strait Islanders have never been referred to in the constitution. As a result, rather than recognising Indigenous people, the referendum left a silence at the heart of the constitution."

The 1967 referendum also failed to deal with sections of the constitution that permit racial discrimination. Currently, Subsection 26 of section 51 allows the parliament to pass laws that can discriminate against any Australian on the basis of race. This is problematic for two reasons: firstly, the concept of "race" is outdated and debunked; secondly, the High Court has previously ruled that the amendments made at the 1967 referendum do not restrict the Commonwealth Parliament to making laws for the benefit of the "Aboriginal race", and the Parliament can in fact make laws to the detriment of any particular race.

The Road to Constitutional Recognition

In 2010, then-Prime Minister Julia Gillard appointed an Expert Panel to lead a national conversation about making the recognition of Aboriginal and Torres Strait Islander peoples in the Constitution a reality.

Consultation and dialogue with Indigenous people around the country reaffirmed that words are not wanted.  Action that cannot be undermined is called for in the recommendation for the “establishment of a First Nations Voice enshrined in the Constitution” and a declaration of recognition in the Federal, State and Territory Parliaments.

In addition, there were some recommendations for actions that are not contingent on constitutional changes, such as the founding of a Makarrata Commission, but would have the effect of linking Australia together and building a common future that acknowledges and remembers the past but does not become debilitated by it.

The focus of the outcomes from the regional dialogues was for a process of truth telling and reconciliation that does not require constitutional change but a system of truth telling and treaty or Makarrata to find a united way forward that allows for self-determination.

At the same time, both the South Australian and Victorian Governments have begun a process with an aim to develop a treaty with Aboriginal people in South Australia and Victoria. This action gives hope that some parts of the nation’s leadership is keen to change the way Indigenous people are treated in Australia to reflect their voice, face the past and build a better future.

The Council's report was accompanied by The Uluru Statement of the Heart: a call to the people of Australia to work with Indigenous people to establish “a First Nations Voice enshrined in the Constitution” and “a Makarrata Commission to supervise a process of agreement-making between governments and First Nations and truth-telling about our history”.  This would bring a uniquely Australian perspective to the process of reconciliation and rebuilding of a cohesive nation where every person is accorded due respect and equal opportunity.

’Makarrata’ is a word in the Yolngu language meaning a coming together after a struggle, facing the facts of wrongs and living again in peace.

While it is outside the scope of the Council, it is recommended that as part of the Constitutional Reforms, some sort of agreement making system is created.  The English word might be ‘treaty’.  The Yolngu word is ‘makarrata’.

Also, there is an appeal for ‘truth telling’.  For Australia to be reconciled and grow as a cohesive nation the whole of history must be told; including the atrocities visited on Indigenous people from the time that European settlers arrived.  In addition, the fact that the concept of terra nullius (that Australia was an empty, unowned, uninhabited land when the European settlers arrived) is false must be recognised along with the damage this concept has caused.  Facing the past allows opportunity for reparation, reconciliation and rebuilding together.

Truth telling was not formally recorded as a recommendation as it falls outside the terms of reference for constitutional reform.  However, every dialogue was unanimous that this had to become a focus in order to affect positive change, hence its inclusion in the Uluru Statement from the Heart.

Isn't this just symbolic - it won't change anything?

This point is often made by non-Indigenous politicians and commentators who have never had to experience the discrimination and racial prejudice that Aboriginal and Torres Strait Islander peoples have faced since 1788.

Constitutional lawyers Megan Davis and George Williams have also responded to this point:

"Medical research shows how legal discrimination and exclusion can have a negative impact on mental and physical wellbeing. Indeed, it is hard to underestimate the emotional and other costs of being cast as an outsider in your own land.

Experts have recognised this. For example, the Royal Australian and New Zealand College of Psychiatrists has said: The lack of acknowledgement of a people's existence in a country's constitution has a major impact on their sense of identity and value within the community, and perpetuates discrimination and prejudice which further erodes the hope of Indigenous people." The college concluded: "Recognition in the constitution ... is an important step to support and improve the lives and mental health of Indigenous Australians.

Examples from other countries such as Canada, New Zealand and the United States highlight how the right legal settings can help to produce comparatively better health outcomes. The hope is that changing the Australian constitution to recognise Aboriginal and Torres Strait Islander peoples would contribute in the same way."

We seek constitutional reforms to empower our people and take a rightful place in our own country. When we have power over our destiny our children will flourish. They will walk in two worlds and their culture will be a gift to their country.

Uluru Statement from the Heart

The Council established a system of regional community consultations in 12 locations across the country as follows:

10 members from each consultation group were elected to attend National Council at Uluru to bring key ideas to the whole group.

The consultations and surveys were based around the five options for reform including:

It is important to note that each of the 12 groups came to very similar conclusions.  This is outlined in detail in the final report.

The Council engaged with the wider community via social media in two ways:

The surveys were conducted from November 2016 and May 2017 and the website/digital platforms were available from February 2017 and 15 May 2017.

The results from this segment came in different formats as part of the information gathering was online and telephone surveys and the other from comments and tags left on social media posts via the website, Facebook and Twitter.

There was a marked difference between the results from the surveys versus that on social media.  Survey results were overwhelmingly supportive of change, reasonably evenly spread across the five options above.  Sentiment was most favoured toward Option 3, then 4, 2, 1 and 5.  On Social Media, results are more a measure of sentiment.  Response was predominantly neutral or negative toward any change with Option 3 the most popular, followed by Options 1, 5, 4 and 2.

Public Submissions were called for and received between December 2016 and May 2017.  1,111 submissions were received, 1,057 via structured on-line survey and 54 free form submissions via letter, email or other document.

The Submissions were then reviewed and the feedback analysed by an independent group to reveal the findings.

The results from these submissions were positive with 90% in favour of some sort of Constitutional recognition for Aboriginal and Torres Strait Islander peoples.