Fourth Sunday of the Year

It is rare for the readings seem to have a common theme. Love is the repeated message. Despite diverse expressions and different demands, it is constant and connected with justice: equity, peace, reconciliation and forgiveness. In Luke, Jesus was jump-started into action. Today’s gospel reading continues from last week with two diametrically opposed scenes in one narrative. The first is good news: Jesus reads the Isaiah scroll at the Nazareth synagogue. He preaches his first sermon and with one short verse announces: ‘Today this scripture has been fulfilled in your hearing.’ The people assume that God’s blessings and liberation is coming their way: that these are exclusively for them. 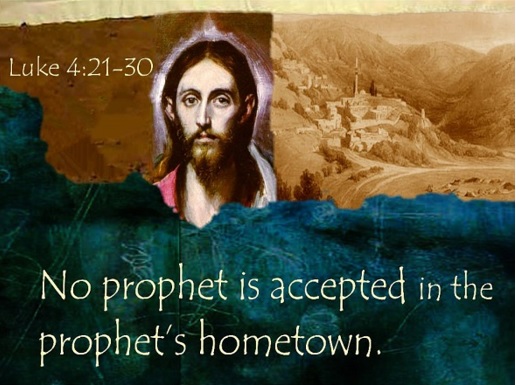 And then Jesus upends everything. Jesus’ message turns sour when he draws on a list of prophets to drive home a point prompting his listeners to respond with murderous rage. Jesus seems like many Jewish people today who are accused of being ‘self-hating Jews’ for daring to condemn Israeli excerptionalism and repression of Palestinian people with impunity. Last Sunday, Jesus made clear who God’s chosen people are and it is not tied to national identity. They are the poor and oppressed wherever they are. The people were reminded of the Palestinian widow in Zarephath, an alien widow, to whom Elijah was sent to feed; how Elisha healed a military commander from Syria of leprosy. Jesus was in effect saying, “When I talk about God freeing the oppressed and giving sight to the blind, I’m talking about God embracing the people you avoid, the people you do not want to be near, those you call ‘enemies.’” Jesus rejection prompts us to reflect on how we reject and turn away people who no longer fit the image of who we think they are? It even happens in families! How often do we also make the mistake of looking at our loved ones, and saying something along the lines of ‘isn’t this the son of Joseph?’ or ‘why isn’t this person the same as who they had been before?’ or ‘why has this person changed?’ Sometimes, we reject people whom we used to love, just because they behave or think differently now. So, no surprise that the people were so enraged.  They were enrages when Jesus pointed out the inclusiveness of God’s reign and that they were not exclusively special. God’s inclusiveness carried with it responsibility. This was not something new. The people knew these stories but preferred to be amnesiac and ignore them. Jesus’ coming showed that God would cut through the boundaries we create. Jesus was opening the eyes of those before him to their exceptionalism, racism and nationalism. He was trying to set them free of their ‘captivity’, reminding them that God’s love extends to everyone – and so should theirs. For Jesus, God’s circle of embrace, welcome and hospitality is outside the usual lines and much greater than ours.

So today, it might be reasonable to see Palestinian people as God’s chosen people – or Yemenis or Afghan people. Palestinians are dispossessed, oppressed, killed and crippled for life – with impunity. Who is listening? Prophetic words from young and old people and First Nations people are ringing out with urgency to tell us that things are not working; that the Earth is gasping for breath; that biodiversity is being threatened; that the poor are dying for lack of vaccine; yet, the middle class is urged to keep shopping. Prophetic voices are often unheeded when they remind us that we are in this together - that we have a living relationship to the Earth and one another. They also tell us we can and need to do something. Jesus’ proclamation in last week’s gospel indicated God’s agenda which is continually enfleshed: to hear the cry of ‘the poor and the poor earth’ and to amplify their voices. These are the ones God looks upon but to live that out could result in rejection as one sounds the alarm against conformity, prejudice, exclusiveness, bias, greed and stinginess.

But, God’s final word is not destruction and annihilation but restoration and re-union with God, one another, the land, and the whole earth community. But, can we hear the voice of God in ‘the poor’ and the marginalised earth today? As we have just celebrated Australia/Survival Day, we had the opportunity to let the First People speak to us and tell their stories of concern, grief, dispossession, neglect, racism and loss as well as their dreams. These stories are invitations for us to touch new parts in our humanity. God has seen and sees their need. Will we be God’s presence and voice? We were ‘formed in the womb’ as were Jeremiah and Jesus. What a thought!  ‘I appointed you before you were born’. Each of us is appointed from the womb to be God’s heart and presence in the world. When we say ‘we have to protect our way of life’ are we aware that it is this way of life that deprives the majority of people on this planet what they need to live fully human lives. I am just reading the the 2022 Oxfam Briefing Paper Inequality Kills. Clearly Jesus words touch on what this document says and many would not want to hear about. People actually die because of inequality which the Covid pandemic has brought home to us. Unequal access to income and opportunity does not just create unjust, unhealthy, and unhappy societies but kills. We have seen people die of infectious diseases for lack of vaccine, even though they could have been produced and distributed if we shared more. People died for lack of adequate hospital care because public health was underfunded. People died as other diseases and illnesses could not be treated because public health was overstretched and overburdened. People died of despair and desperation at the loss of livelihood. People died as the rich got richer and corporation made unprecedented profits. The suffering has been disproportionate. But suggestions that we need to undo structural inequalities of gender, race, ethnicity and caste that feed economic disparity could lead to being thrown ‘off the cliff’ as almost happened to Jesus.

The question we all face is this: Am I willing to accept what God is telling me? God has chosen me to be a prophet. Can we accept that? It is not just about criticising an unjust status quo but as James Cone says to ‘let the suffering speak’ and Walter Brueggemann’s reminder that we are called to give voice to God’s grief, pain and anguish over the suffering of God’s people and the Earth. As we look around our world, what do we see? Or, are we blind to it? The media, our reflection and prayer can inform us. What does being a prophet for Jesus involve in Australia? Did we lose an opportunity to make a consistent response to the very temporary detention of Novak Djokovic compared to the years of detention endured by asylum seekers? Do confront the materialism that is connected with violence, and causes us to build more walls and fences? Do we think twice when our country decides to spend billions on weapons of war that provoke suspicion and sow discord rather than peace and solidarity? Jesus’ word about love is a call to go outside the narrow lines ‘the stranger’, ‘the other’, the enemy.

When Jesus says, ‘Today this scripture has been fulfilled in your hearing’ he is saying that life-turning, unconventional, queer, upside-down kinds of things are about to happen in ‘our’ midst. The message of the gospel, good news, is coming out into the harsh light of day and each one of us get to become the radical living out of God’s message of love for the world. I read recently that the only Bible many people will know is the person who lives out the embrace of God in their lives. The broken systems in our world need to change: sexism, racism, homophobia, violence and war that displace the innocent and vulnerable. We cannot spiritualise the words that Jesus proclaimed from Isaiah. As Jesus looked straight in the eyes of his people, he is also looking straight at us. Change has to start here. We are asked to make hard decisions on behalf of ‘the poor’ - those unlike us. It is, was, a political platform. It still is. It is the way we order our relationships and relate to one another; how we live together and how we get along. This is not the politics that creates boundaries, builds walls and establishes borders which tend to mostly define our relationships. Then there are other borders - ideological, religious, or emotional which first exist and arise from within us and then project onto the world and each other.

Jesus models for us one continually who crosses borders: eating and drinking with tax collectors and sinners, healing on the Sabbath, reaching out to non-Jewish people. He lived and related to people with regard to the established walls that separate and the rules that categorise and label people. As love should have no boundaries, pain, the hurt of poverty, captivity, blindness, and oppression know no boundaries. As Jesus’ politics, his way of relating and regarding people, has no boundaries, it is true for us as well. It can be a hard and painful lesson for many to learn. It was for the people of Nazareth because his politics challenged or contradicted their boundary creating politics. Luke includes an interesting detail: Jesus goes through ‘the middle.’ He refuses to be caught in the binary trap-not pro-Jewish and anti-Samaritan. He would not be pinned down to support any political party or religious denominations today. He won’t be contained. Let’s cross some borders and go with Jesus on his way. Jesus came to be with us, whoever we are. This is so important because at some time or another, we will find ourselves on the wrong side of a dividing line. Our gender, our age, our race or colour, who we love, how much money we make, our physical abilities or challenges, our nationality, where we went to school, how we pray—these will make us unworthy in the eyes of some. Someone once said whenever the world draws a line, Jesus steps across to the other side. His love is just that big.

Help us to remember that you are with and among us

God, you before us,

God, you behind us,

God, you beside us,

God, you below us,

God, you above us.

Empower us to be patient and kind,

You are our stronghold and confidence now and forever. Amen