25th Sunday of the Year

In Jesus first followers, we find the trappings of ego and greed. The familiar scene where they argue over seeking places of power reminds us that the desire to be elevated, to be the best, to be more than others, is very real. Deep wisdom forces a reality-check that there is within us a tendency to quickly turn a simple disagreement into dissolved relationships. This is where the love that Christ embodies is most tested, and most needed. James tries to help the community to be centred on Jesus and his teachings when it finds itself at odds.

For James, wisdom involves gentleness of spirit and care for the well-being of others. It is born of kindness to friend and foe alike. Gentleness is grounded on reverence for life in its many forms that is exhibited in large-spirited and impartial behaviours. It is timely to touch on the reality of quarrelling and dissention in the church especially between those who find themselves in accord with Pope Francis and who disapprove with his priorities. 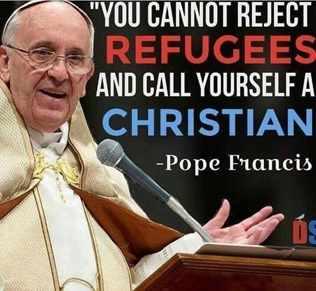 Once again, Jesus’ followers struggle to understand the nature of his mission and their role as leaders of his emerging movement. ‘Who is the greatest among us?’ they argue. They still see greatness in terms of access to power and lordship over others. No doubt, like many people today, they were captivated by images of power embodied in their contemporary rulers who were privileged with a controlling power.

Having heard Jesus’ talk about death and resurrection the question arises: would Jesus give up everything for them? For humanity? That he refuses the fight back and play the war games we engage in? Builder of empires or builder of God’s reign. One is preoccupied with success, influence and expansion and driven by power, ambition and self-image, and the other with healing and strengthening relationships expressed through self-sacrifice, vulnerability and humility. We could say that the history of the church was at times, maybe often, more about building an empire rather than living according to the reign of God. It is so easy to slip into an empire building mentality in all our connections and relationships based on building walls rather than dismantling them. Empire is about conquest, subjugation and control as we see in many Western countries. And it does not contribute to peace building and encounter. The way of Jesus has nothing to do with ambition, power, upward mobility and glory. Christian discipleship is about being willing to be in solidarity with others, to be vulnerable with the vulnerable, to sit with the least, and to be with those without power. Jesus message needs to be continually listened to. It is not easy to accept and live by downward mobility. We see here the influence of St Francis on the teaching of Pope Francis where he calls us to take on the smell of the sheep, to be a church that is inclusive, humble, a ‘field hospital’, to build a culture a encounter. None of this is possible where we seek power, esteem, control and wealth.

We are invited to consider greatness in terms of relational rather than unilateral power. It involves commitment to the least of these. The greatest of people are those who love well, seeking beauty and bringing forth wholeness in their relationships. The underlying love here is often countercultural because it does not conform to patriarchy or matriarchy, power relationships, possessiveness, or even cultural roles or class-distinctions, but seeks healing and wholeness, freedom and creativity, beauty and growth, for the beloved, whether a child or adult, spouse or friend. It may even involve sacrifice and suffering to achieve the greatest good and promote beauty of experience. Love is not about ‘me,’ but about ‘us,’ including the non-human world, and may transcend social convention, as Jesus’ love did, to be in congruence with God’s realm.

Hence the depressing scene, that is replicated over and over in our churches, corporations, communities and families as the disciples try to one up each other. Jesus’ lesson might seem sentimental, but is as scandalous as the story of his dying and rising after three days. Children in that world had few rights. There were on the periphery and considered a nuisance. They were among the last and the least. This is in contrast to what we see today with helicopter parents!!

Jesus sees greatness in terms of service and empathy; in the willingness to give oneself on behalf of others rather than for self-interest. It involves humility and being willing to serve rather than be served. It inspires unity and empathy rather than separation and apathy.

As, the disciples appear to believe that greatness involves being set apart from their peers in power and adulation. Jesus presents a countercultural vision of spiritual greatness, where the leader is servant and easily forgotten people take centre stage. Children, not Caesar, model what it is like to be great in God’s realm—and in welcoming children, we welcome God and see the world with new eyes. Our visions of greatness will shape our spirituality, ethics, and political involvement.

It seems that mystics—irrespective of culture, religion, or era—have some common characteristics. As they experience God’s presence and love they are able to attain a broader vision that enlarges their concern for their sisters and brothers and the whole of creation. They discover that the holy is embedded creation and all people. Julian of Norwich discovered God in a hazelnut. Francis of Assisi experienced God in the disfigurement of a person suffering from leprosy. Mother Teresa saw Christ dying on the crowded streets of Calcutta. These mystics moved from focusing on God alone to finding God in the least of these. Their personal experiences of the ‘other’ or ‘divine’ or ‘sacred’ expands to embrace all – people and creation – and to an identification with the well-being of the larger world and drive us to become active in seeking the transformation in the social order. Howard Thurman connected the breadth of mystical experience with concern for the well-being of others. He said, ‘Social action is an expression of resistance against whatever…separates one from the experience of God, who is the ground of his being.’  So ultimately, it follows that one’s social agenda ‘has to do with the removal of all that prevents God from coming to himself in the life of the individual. Whatever there is that blocks this, calls for action.’ So the only greatness we can achieve is in terms of our relationship with Jesus. As we cultivate that spirit and vision, we become Christ to others in our service, our justice and peace-making, our compassion and hospitality. A deeper vision as to who we are and who it is that resides in us, enables us to respond to the Christ we experience in everyone we meet, revealing to all their own deeper Christlikeness. It is about making visible what is invisible.

The disciples wanted to know who was the greatest, and Jesus says, ‘Do you see this child?’ This child who was socially invisible, stands-in for Jesus. As with children in antiquity, Jesus saw something his followers did not even know they are missing. Jesus is saying to us again today to start seeing the socially invisible because to receive the invisible One is to receive Jesus, and to receive Jesus is to receive the One who sent him? Are we able to make visible the invisible? Francis of Assisi (October 4) being raised in privilege and wealth was revolted at the sight of people with leprosy until the day he saw one along the road and embraced him as one of God’s beloved. No longer disfigured in his eyes, they were now, in the words of Mother Teresa, ‘Christ in all his distressing disguises.’ Francis learned that greatness involves care for the least of these. Pope Francis moved many people when he stopped the pope mobile to embrace and kiss another man suffering from a disfiguring disease.

As we saw, in Jesus’ time, children were considered as expendable, yet he embraced a child as a symbol of true greatness. A child—not Caesar—represents the heart of God. Jesus asserts that greatness involves empathy and compassion. It is embodied in caring for the most vulnerable members of our community, by embracing them with love, hearing their stories, and responding to their cares. To abuse a child, indeed anyone who is vulnerable, in any way is to abuse the One whose image they bear. To leave children homeless is to abuse the image of God they bear. To transport children to off-shore detention centres is to abuse the image of the God they bear. To leave children starving and without adequate health is to abuse the image of the God they bear. Are these children still expendable? Are not poor people, suffering people, people who are forgotten or rendered voiceless but out shouting and avoidance expendable or ‘sacraments’ of the Jesus. Jesus invites us to listen attentively to him and live like a true disciple. Can we recognise Jesus speaking to us through the little ones, and people who are discarded, or live on the peripheries of society and the Church, or indeed the children, women and men in Afghanistan and other parts of the world who seek to live in safety and dignity?

As we listen to today's readings, may we examine our attitudes about power, service and love.

God, give us your wisdom,

for the sake of your