Gregory Boyle in Barking to the Choir comments on ‘secular culture’ which is depicted as always being ‘hostile’ to Christianity. Boyle does not believe it to be true. He says, ‘Our culture is hostile only to the inauthentic living of the gospel.’ It seems more likely that that hostility to religious organisation is really saying that unless they see, they will not believe. So often when interacting with people who no longer identify as Christian, they say it is ‘because of Christians.’ Because of what they see, or don’t see in their lives.

The reading from the Acts of the Apostles depicts a community where people held all things in common and cared for the needy. When we can no longer see Jesus, when those around us can no longer see Jesus, they are looking for him in our lives. They are looking for him in communities of faith that care for those who are needy, that sacrifice rather than hoard, that include rather than exclude, that listen before speaking. They are looking for us to hold out our hands to see if we have wounds. Jesus holds out his wounded hands to Thomas, the proof that his love and suffering are real—that he is the same man who was crucified. Maybe that is what the world is asking from us: to see what we are willing to risk for the sake of love, for the sake of one who loves us. Thomas is unfortunately labelled as ‘doubting’ but he never said, ‘I doubt it,’ but ‘I will not believe’— unless I see. He is saying that bodies matter especially those that have confronted the powerful and injustice and bear the marks of torture. When the risen Jesus appeared to his friends it was a familiar body with the wounds he endured at the hands of brutal empire. These are how he is recognised. This history of pain and suffering is not suddenly forgotten, somehow left behind. These marks are still present, these wounds cry out as a witness to who Jesus is and why his life, death and resurrection matters.  It is through his wounds, the marks of suffering, that Jesus is recognised.

Thomas is not a doubter but a courageous follower. It is he who takes the dangerous journey to Bethany at the news of Lazarus’ death whereas the other disciples were fearful and cautious, and says to the others “Let us also go, that we may die with him” (John 11:16).There is no evidence that he doubts Jesus. He doubts the witness of the other disciples who say they have met the risen Jesus, yet remain fearful and in hiding. Little wonder Thomas has a hard time believing. He wants to see what they say they have seen. Despite Jesus’ earlier appearance, they remained locked in fear in the same house, with the same closed doors, and the same locks.

When Jesus appears the second time, Thomas is present. Thomas does not need to touch Jesus but believes and confess that Jesus as ‘My Lord and my God!’ It is in Jesus’ wounds and scars Thomas sees victory, not defeat. In the wounds and scars of Jesus Thomas does not see defeat but rather victory. The brutality and cruelty of empire had no power over him. His wounds do not have the final word as they do not have the final word in all the people who have been unjustly crushed and tortured. Thomas has recognised and names a new relationship and a new way of being in the world. It did not involve giving in to fear that keeps people, like the other disciples closed up or entombed in the room.

Thomas expected and demanded to see wounds. It was something bodily. To believe Jesus is risen means one cannot look away from wounds in oneself or others. It is difficult to believe when people are locked up in fear. It is difficult to believe when people look for security in possessions rather than relationships. Being in a locked room or locked church or locked border is not a good place for a follower of Jesus to be. Jesus’ appearance in the upper room is not dissimilar to his appearance at the tomb of Lazarus. As Jesus said to Lazarus and to the disciples, ‘Come out!’ He is breathing the Spirit of life, mercy, compassion, courage and peace upon us for us to not only go beyond closed doors but also closed and barricaded hearts so that we can take that peace to others – so that they too will not make the tomb their natural habitat. For Thomas, however, faith is something that walks, touches, responds, learns.

Our church is being challenged by Pope Francis about being a ghettoed, closeted and closed community that is fearful of change, women’s rights, Muslim, progressive people, the love of gay and lesbian people, and the stranger. We are challenged to move from ‘kleiso’ (closeted)to ‘ecclesia’ (open church). The greatest challenge is not closed doors but closed minds and hearts controlled by fear and that prevent us from opening the doors and removing the stones from the tombs of others.

Thomas sees with his own eyes and make his unique response to the Jesus who continually comes and gives us peace and the Holy Spirit. Not only peace but to be peacemakers. Jesus was sent to transform this world into a reign of justice, peace, love and joy. That is our task. We must be people who insist that the way to bring peace is through forgiveness, reconciliation and love, not by violence, war and death. It also means resisting violence and war, hunger and sickness, homelessness. We cannot do that in a locked room, ghetto, church building.

Thomas, unlike many others, was not locked away in safety. He knew death when he saw it. He knew that rising from the dead had something to do with wounds and scars. The only God that matters is one with wounds. Only this God can be in solidarity with crucified peoples of the earth and our ailing planet. Today’s gospel passage is super-imposed over each image of a wounded adult or child or the earth. And Jesus points to these wounds – for they are his too. He says to each of us ‘put your finger here’ – to touch, to put our minds and voices there. Our faith needs to have hands and feet; it needs voices and a heart capable of crossing walls as Jesus does - real walls that have divided people.

The risen Christ comes to us with scars. It witnesses to his oneness with us and all people who bear scars of any kind. Jesus constantly enters the locked places of our lives – the fears, the blindness, the sorrow and scars to open us up to new ideas, new possibilities and change.

The wounds are a reminder that Jesus was crucified by the powerful to maintain the religious and political status quo. Pope Francis in Laudato si’ reminds how the earth is being crucified as well-wounds in the form of countless species extinctions, collapse of fisheries, rampant deforestation, demise of coral reefs, rising sea levels, acidified oceans, and rising global temperatures, caused by the unprecedented rise in greenhouse gases from industrial nations. Those wounds appear in the mounting human toll of famine and drought leading to starvation and death, with more and more people fleeing their drought-stricken lands or sinking coasts. We cannot look away. These wounds cannot be ignored. They must be seen and felt and believed as in the case of Jesus. Can we touch the deepening wounds of the earth, encounter flesh and blood victims of polluted water and rising sea levels, meet with people whose lives are disrupted by drought, flooding, and storm?

Do we remain in that symbolic upper room in fear and hopelessness and avoid the confrontation that may come when we raise our voices about these wounds? Do we do life differently? Will we let the god of individualism and capitalism continue to dominate our lives and ignore the wounds of the earth and the poor? Do we believe that we are held together by the presence of one who speaks words of peace, wholeness, contentedness, and inclusiveness? 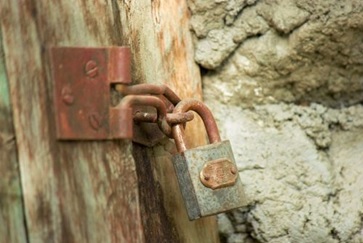