Third Sunday of Advent Year A

What do we anticipate from God in our day to day life? How do we expect God to exercise power in our world? What results do we anticipate as a result of prayers for peace and justice, for the sick or for refugees?

The philosopher, Immanuel Kant said that all important human questions can be reduced to three: What can I know? What ought I do?  and What may I hope for? The last approximates John’s question today, ‘Are you the one who is to come, or are we to wait for another?’ It was not an academic question. He needed to know, ‘Has my whole life been a waste?’ 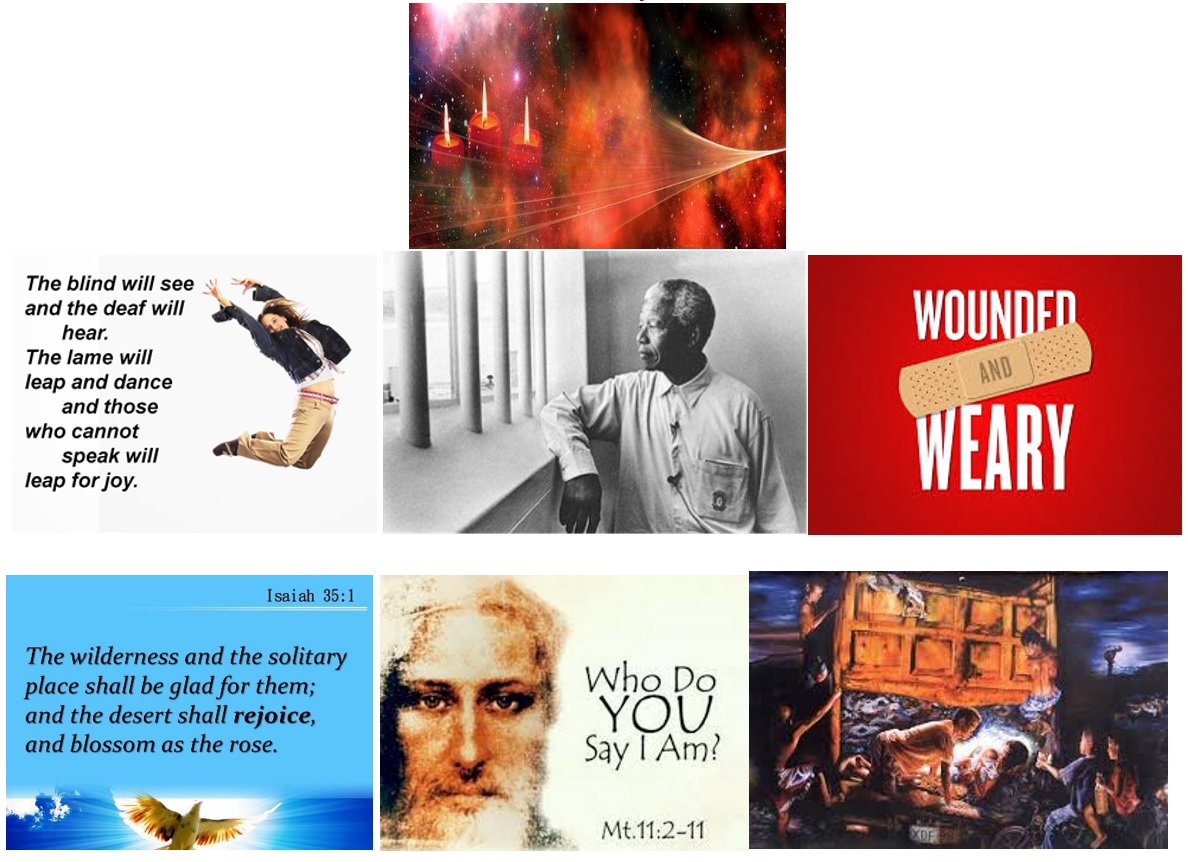 John preached a God of vengeance and reward. He expected God’s wrath to come down at any moment. He wanted to know what kind of liberation Jesus was offering. The people at the time expected the coming of the Christ-the Messiah – to liberated them from Roman slavery and oppression. Some thought he would be like King David, and other believed that he would come from the margins like the ancient prophets. So while in prison, John asked Jesus through his disciples whether the Christ had come or should they anticipate another. Jesus’ reply relies on John’s knowledge of Isaiah and many Psalms. ‘Go and tell John what you hear and see: blind people receive their sight, the lame walk, the lepers are cleansed, the deaf hear, the dead are raised, and the poor have good news brought to them.’  This Christ was not like ‘a reed shaken by the wind’ or ‘dressed in soft robes;’ or concerned only about souls rather than our whole being, our sisters and brother, and the cosmos; or one who pacifies and enslaves people rather than liberating them.

As John focused on retribution and envisioned salvation by violently overturning oppressors, Jesus focused on people in need, people who were blind, paralysed, and lame. Rather than claim anything for himself, Jesus told them to look around and see what was happening in their midst. Those who promote anti-poor policies, even people who accept Jesus as their personal Lord and Saviour, are a slap in the face of Jesus because they do see who the recipients of God’s special concern are.  John questioned Jesus' message and methods. Jesus wanted John to give up his image of a vengeful God and be open to the God of the blooming desert, to the God who awakens life's buried or dormant potential. Jesus wanted John to see what was awakened in people and how they responded without fear of coercion. It was not just about healings and cures but God’s glory shining forth when people who were feeble became strong, whose knees ceased trembling and frightened hearts overcame their fear.

Last week we imagined a different world and a different way of being together by using images of a transformed world. Isaiah’s vision in recent weeks developed from nations at war and desires for peace; enemies becoming friends with justice for the afflicted and distressed; and today, rejoicing, even within creation, as all those who are broken are taken up into God’s dance.  The vision of a peaceable realm is not just about a lion and lamb together, but about what seems more difficult to imagine-people living justly and peacefully together and in harmony with creation. Pope Francis keeps referring to a ‘culture of encounter’.  To promote this culture of encounter, Francis links our throwaway culture with the way many people -the least - feel that ‘they exist without belonging and without participating.’ Our leaders often invoke Christian values, yet their political position flies in the face of the entire Judeo-Christian tradition that expresses God’s special concern for the poor and oppressed. Policies that fail people who are in any way poor are slap in the face to Jesus who presents these people as recipients of God’s special concern. The authentic Jesus reminds us that the least are God’s special concern. Pope Francis’ authenticity is manifested when he refers to God’s ‘preferential option for the poor?’

Recently, on the World Day of the Poor, Pope Francis urged Christians to hear the stifled cry of pain in the frailest members of society. ‘On this World Day of the Poor, Jesus’ word is a forceful admonition to break through that inner deafness which we all have, and which prevents us from hearing the stifled cry of pain of the frailest.’ Francis continued, ‘If our heart is deadened and indifferent, we cannot hear their faint cry of pain; we cannot cry with them and for them; we cannot see how much loneliness and anguish also lie hidden in the forgotten corners of our cities.’ This day, like that of People Living with Disability, or Day for the Abolition of Slavery, should not be like a birthday where we remember them on a particular day and forget them for the rest of the year.

So, the question put to Jesus by John is also put to us. Do we follow Jesus or prolong business as usual which has a message of the prosperity gospel, tax cuts for the rich, dealing with conflict by violence? We know Jesus by looking at those he approaches which involve being present, being with others in their suffering and offering them hope. The question posed to Jesus applies to Pope Francis when he promotes a ‘culture of encounter’ through mercy and compassion. We see in Francis the works of love and mercy that we see in Jesus. Unlike John’s question, the question to the Pope represents a hateful agenda and opposition to his work for a more humane and merciful Church.

Our world is constantly being transformed. A revolution is taking place! It requires the constant challenge to oppressive powers and strengthening the oppressed to struggle and not conform to the existing order. God’s reign is under attack where helping the poor and refugees is criminalised in many places; when people are labeled ‘bleeding hearts’ for seeking justice; when people raise their voices on behalf of others are vilified; when people who speak out or act out for others face the consequences; when people try to be inclusive, work for social inclusion, break down barriers, and work to abolish class divides and find themselves ostracised or even denied Holy Communion; and, when people call for nonviolent responses to conflict and deemed naïve. Advent challenges us to make God real by our actions.

John appeared when God’s reign seemed under attack – as it still is. The rich and powerful do not tend to do what he did – critiquing the structures of power.  According to Isaiah, Psalm 145, and Matthew today people living with disability and living in poverty are the first recipients of God’s favour in days yet to come. (December 3 is the International Day of People with Disability). The healings demonstrate God’s power to upend the status quo but also signal God’s preferential care for people whom the world rejected in those days and today. For us it is an invitation to examine the social patterns of exclusion and injustices that are directed particularly against people with any kind of disability and oppressed and otherwise marginalised. Those in power will not do this. We need to do something about it, because despite this mandate, inequality, injustice, and oppression against people with disability have been sanctioned in various ways: on assumptions of biological, moral, and social inferiority alongside a presumed failure on their part or failures of their parents by sin. The results of those assumptions stand as a witness against newborns, infants, children, and adults who have been neglected, abused, and murdered on account of the presence of disability in their lives. The call to action needs to include advocacy and friendship – not just solidarity. The Word of God today calls upon us as God’s people to ‘Strengthen the hands that are feeble, make firm the knees that are weak, [and] say to those whose hearts are frightened [to those who are oppressed]: Be strong, fear not!’ (Is 35:4). As we all await the Parousia the great reversal of fortunes for those who are oppressed depends, perhaps in large part, upon us - with God’s help,

Many who want change and act for it see little progress and live with pain and disappointment especially when the institutions we belong to do not follow the gospel in its dealings with people. Like John, we do not see the world changed in our lifetime. Dashed hopes and shattered expectations are not strangers to us. But, our challenge is to offer world something new. If we are to ask the poor, the stranger, the outcast in society and the church how would they respond if they saw us? What would others see and hear in us?

A Change Is Gonna Come

I was born by the river
In a little tent
Oh, and just like the river, I've been running
Ever since

Then, I go to my brother
And I say, ‘Brother, help me, please’
But he winds up knockin' me
Back down on my knees, oh

There been times that I thought
I couldn't last for long
But now, I think I'm able
To carry on