Last Sunday, Jesus was tempted in the wilderness towards the spectacular, magical and the powerful. He revealed who he was and who he was for. Like the Transfiguration, it was an ‘uncovering’ or unveiling of Jesus, and of God’s reign which is already present and at work even if we, like the sleeping disciples, do not notice it.

On the mountain, something special broke out for a moment through Jesus’ humanity. Might that have been an explosion of God’s closeness, compassion, justice, and tenderness? Jesus was a channel of God in his humanity and Paul reminds us that it is these ‘wretched bodies of ours’ that are also the material of transfiguration, transformation and change in our world. So, seemingly, the Transfiguration is not only about Jesus but about us and our call and need to make a difference. Today’s gospel is not only about Jesus, but the moments in our lives when our eyes have been opened and we could recognise the sacred within us, in others and Creation. It is also about us, like Jesus, facing our fears to courageously put others first?

We are invited to see in a new way – of seeing in a new and deeper way that leads to action where we connect with God’s precious ones: the poor and oppressed. This comes about by listening to Jesus and humble listening to each other. As the disciples saw something they had not seen before, we  too are invited to ‘remove the veil’; to see the ‘more’ – God’s presence and hear God’s call – in people and all creation. Removing the veil might involve not listening to the propaganda that our partisan media and nasty politicians spread against other countries, other groups of people and diminish their humanity. It might mean opening our eyes to how we discriminate against people of colour and different faiths (Afghan and Middle Eastern people) but fast track visas to people who look more like us (Ukrainians). We need to see in a whole new light as divisions tear apart people in churches, in nations, in the world. We do this by opening ourselves to God’s grace and recognising it all around us, in every person and every living thing. To see probably is to see God in the ’other’ as sister and brother as well as creation. It is a challenge again in this current violent war in Europe how we choose to see people whom our political leaders designate as our enemies.

When Paul says ‘our citizenship (homeland) is in heaven’ he is referring to a way of being and seeing where different values and priorities are played out to those of the world. It leads to accepting responsibilities rather than avoiding them or averting our gaze or being silent when confronted by local, national, and international issues. Being ‘citizens of heaven’ means seeing this world and imagining it ‘transfigured’ or ‘transformed’ and working to make it happen. It means looking outwards rather than just striving for our rights but the rights of all people - the poor and the vulnerable; to be the voice for those pushes to the edges of church or society and whose voices are not heard. John Paul II said, ‘We are all really responsible for all‘, not just our own, but those beyond our borders especially when our actions and policies are detrimental to asylum seekers, people trafficked or in bondage, the aged, the unemployed, the homeless, members of minority groups, Pacific Island nations, and our collaboration with human rights violating countries such as USA, Israel, Saudi Arabia, Myanmar, and Indonesia. These are the concerns of the ‘citizens of heaven’.

It is possible to see things differently and act differently. It is possible to see the more in others because we recognise God in others, to recognise their sacredness and dignity. It is possible that we can live together in our diversity rather than division: to let go of racism, distrust of people of other faiths, hatred for homosexuals, to let go of greed, power, or the need to control, to let go of fear that leads to paralysis and inaction, to solve problems nonviolently, because we have been to the ‘mountain’ and come back from the mountain to level ground knowing that God is in all people and things. It is possible to see that war and injustice, poverty and hunger are not inevitable. Young men and women continue to offer their blood to the idolatrous ‘God of war’ by our leaders who are blind drunk on patriotism, power, domination, and accumulation, and dare to tell us who our enemies are. These issues have broad implications for our activity as Christians and for peace and justice-making. These are life issues, and that God is a God of life. Like Jesus, our mission is ‘to proclaim liberty to captives, recovery of sight to the blind and to let the oppressed go free and to proclaim a year acceptable to the Lord.’

The kind of action God approves of in us is not action motivated by fear, but by courage – even in the face of failure, personal harm, or the possibility of death itself. It calls us to put aside the fear that ranks personal safety and security above all else. There is the continuous call to action by those who profess to be God’s people against those who oppress the poor and vulnerable in society including those – like some religious leaders - who collaborate with empires as we see in the leadership of the Russian Orthodox Church. Travelling towards Jerusalem Jesus is aware of the risks he faces in confront economic abuses by the temple and collaboration of religious leaders with the Roman Empire. The temple leadership was the oppressing power’s most powerful ally. Jesus found intolerable prompting him to go to the temple and disrupt the business as usual that exploited the poor. The risk was that the Romans would succeed in doing what they have always did in response to uprisings and demonstrations by arresting everyone and crucifying them as ‘terrorists.’ It is unlikely to be different this time. So, the time on the mountain in prayer was to gather strength. Withdrawing in prayer was a feature of Jesus ‘ministry. It was not a retreat from the world but his way of embracing the world which would lead to the cross. In a vision, Moses and Elijah appear to Jesus. Together they represent the law and the prophets, and both had challenged tyrants. Moses reminded Jesus of the chances he took in the leading the people out of Egypt in the original Exodus – which could have been a failure. Elijah reminded Jesus of the ‘prophet script’ that all prophets follow as God’s spokespersons with the inevitable consequences of speaking truth to power. So, what if Jesus’ non-violent direct action in the temple would not bring in God’s reign? What if he is arrested and crucified? Though the cost of prophetic action, Genesis hints that Abram’s God is faithful and will triumph in the end.

The readings tell us that we are not to be led by frightened little men where security comes before compassion for the poor and oppressed. Faith is not primarily about words, thinking, written creeds, but living God’s life. Being a follower of Jesus is not about ‘security above all’ but about taking risks on behalf of God’s true people – the poor, immigrants, and victims of war, violence, and scorched earth. Jesus does not stay on the mountain in contemplation or safety but comes down to where people are. It shows us that God comes down to us and is with us as revealed in the healing of a boy who is possessed. Jesus’s transfiguration, as ours, is incomplete if not connected to care for our neighbour and creation through our tender care. Where we might be tempted to see only barriers and obstacles, God calls us to look beyond.

As we approach elections again soon, the readings tell us that God’s People are not to be led by frightened little men (and women) who place security above compassion for the poor and oppressed. Being a follower of Jesus is not about putting our security above all other things but about taking risks on behalf of God’s true people – the poor, immigrants, and victims of war, violence, and scorched earth. May we not be people who say we believe in God but then cancel that out by our concern for self-preservation, personal needs, and fearful willingness to sacrifice others rather than ourselves.

who longed to gather all God’s children together,

sustain our passion for welcoming and loving all people,

especially those who are marginalized and excluded.

We are aware of the reality

that following you will entail suffering and struggle;

We are not alone or far from your care.

Empower us to persist in your way of peace. 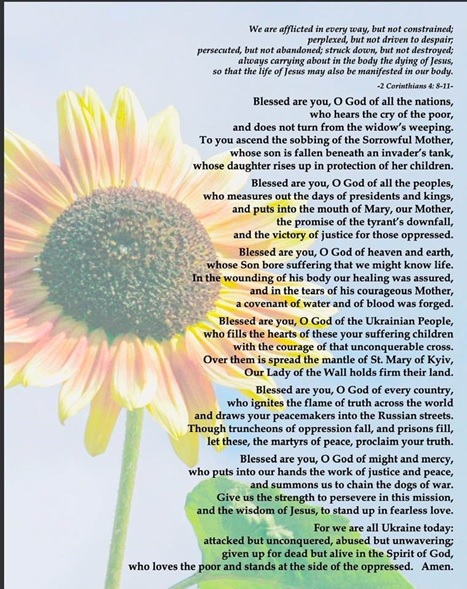