Manifestation of Jesus to the Peoples of all Nations

During Advent, receptivity and waiting were its themes. Epiphany highlights the themes of our response to God’s presence in our lives. We are beckoned to move beyond all we think we know and allowing something new stir within us as we look for something new on the horizon. We strike out for something deeper. We do not just talk about our desire but walk intentionally toward it and making concrete choices along the way. 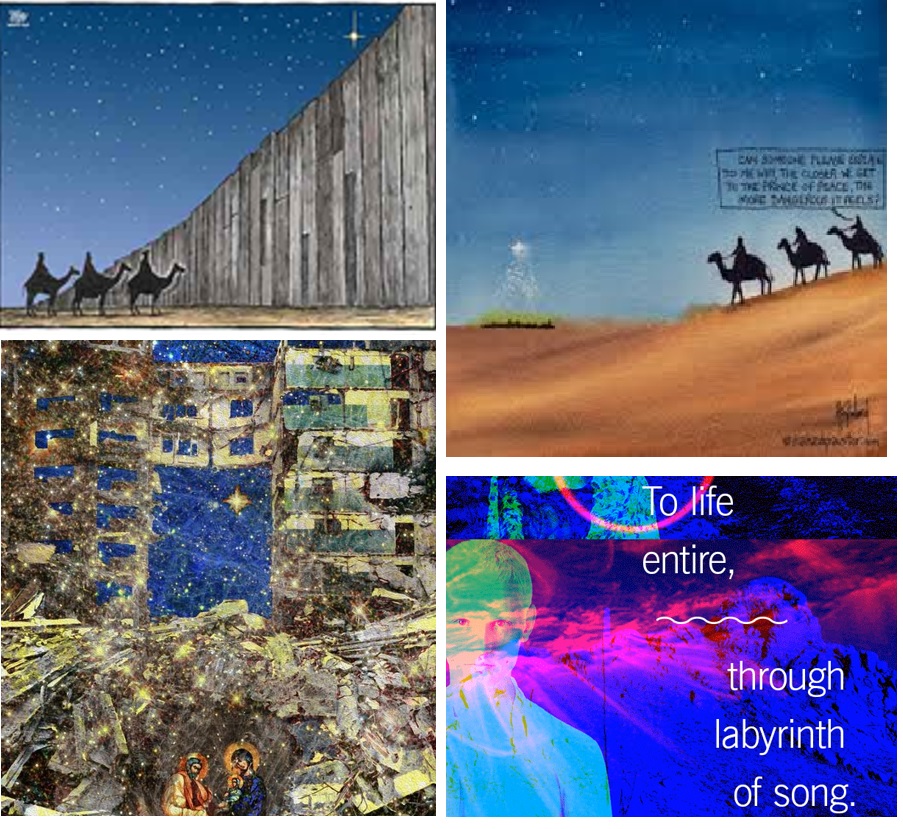 Image by Ukrainian artist Irenaeus Yurchuck
depicting the nativity amidst the bombed ruins and shelters
in one of their many dilapidated cities.

We often come across people who seem to have a greater awareness of God’s hoe for liberating oppressed communities even though they are outside the church. We can be surprised when they lead us to advocate for justice within society and within the church. The call is to expand our horizons and see ourselves as sisters and brothers in the world. Epiphany is a call to hope, rejuvenation, and awakening. Amidst darkness, we can see light where many people have not succumbed to apathy and refuse to continue being silent. Epiphany is a call to look for the love in the most insignificant places – to see traces of God’s presence everywhere – especially in overlooked people and places. There is a continuous call to us to expand our horizons and see ourselves as sisters and brothers in the world. The pandemic that is still not over has opened the eyes of many to recognise the centrality of relationships, the importance of community, and intrinsic interconnectedness of all things. A deep awareness of our place in the Earth community has taught many to have a deep respect for the whole of creation and it sacredness. It’s extension should find a way into our relationships and cause us to seek a ‘politics of peace’ and seeking alternatives to the ‘politics of violence’ that leads to destruction, inhumanity and neglect. We can show that a renewed life – a new normal - is possible for the most marginalised among us. It means working with those who prioritise justice and respond to the cries of the poor and being living witnesses of God’s presence in a broken world. By refusing to be silent, we can reveal new and radical alternatives that offer new and creative ways of being together.

In a 2020 article, Eric Scot English (The Courage to Be, Patheos December 28, 2020), before he had children believed it would be selfish to have children given the horrible state of the world with its hate, violence and disillusionment. Had he had the knowledge about the world now, his feelings would have been more negative. However, not long after the birth of his third child, he had a dream with a scene of complete desolation, fire and crumbling buildings. Except for three flowers all in different colour and size in front of him, destruction was everywhere. These flowers represented his children, beautiful and bright, set upon the background of desolation. An inner voice said that those flowers were there to spread their seed and make the world beautiful again. It was his task to nurture and care for them so they could accomplish this. The writer refers to our great responsibility to teach ourselves and others – including children - how to be lights in this world. The darkness we see is often due to people not taking their role as human beings seriously enough.

It takes courage to exist in a hard world with difficult circumstances and difficult people. To be present is not to merely exist. Few people understand that they can contribute to the world’s transformation - whether large or small. They prefer to diminish their size in order not to be noticed rather than stand tall so others are aware of their presence. It means being willing to take risks; being willing to make one’s voice heard; being willing to stand apart from the herd; and being aware of oneself and the other. If all we did was exist, we would live in world lacking in meaning. Jesus was not crucified for his beliefs but for what he represented in the world. He never implored people to believe a certain way. He always directed us to be a certain way. He was ‘political dynamite’, as it was in today’s Matthew’s story (N.T. Wright). It is good news and disturbing. It is Good News because this birth reveals a God who is with us and for all. It is disturbing to those comfortable in their exclusivity; where there is a ‘we are here’ and ‘you are there’ mentality. The coming of the Magi upsets the political equilibrium. It called into question the rule of an insecure king whose anxiety, fear, paranoia and sense of threat to his power led to the killing of innocent children which still continues. The politics of domination and of costly resistance that resulted in Jesus’ death were present at his birth as children were murdered. Their encounter with Herod and the child in the manger also provoked a crisis for the Magi. When they left the child, their ways of thinking were shaken up and their priorities challenged. Would they collude with the power-hungry Herod or follow the God revealed in this child?  This is still a temptation for the church (pace Constantine and taking up arms rather than follow the nonviolent Jesus)!! Would they take another way, beyond the familiar and safe? It involves entering the life of ‘the other’ whether as individuals, communities, a church or a nation. It means, as Pope Francis says, moving to the world’s margins and peripheries which may be as near as the next street or distant parts of the world. Wherever it is, we need to expand our horizons and boundaries of concern towards people that God chooses to make a home amongst – ‘the least among us’. We cannot continue to collude with any system ‘that marginalises the poor, a system which builds walls instead of bridges, a system which says people on the margins of society should be excluded, a system which says we’re not welcoming people any more into our country’ which we have mastered in Australia. Collusion and injustice is made possible by our silence and seeing ourselves as distinct from and ‘other than’ others.  The religious leaders of Jesus' day had worked out a peaceful accommodation with the Roman Empire and still is maintained in many ways. Accommodation and complicity results in silence on injustice. The Magi took another road!!

The bright star pointed to a promise for all occupied places whether ancient and contemporary. The Magi come from a different land, culture and religious tradition but cracked open our understanding about hope in hard places, about resistance and the need for stars. Whilst occupied territories bristled with tension and amid troubled communities, tangible signs of hope were found, energising resistance and subversive actions. They came in a spirit of solidarity, seeking an infusion of hope to take back home. Matthew comes alive with the fraught political climate where Hellenisation had infiltrated in 330 BCE as Alexander the Great defeated the Persians and imposing Western influences and economic exploitation, as in Palestine. There was a deep desire for a return to indigenous rulers who respected their culture and ways.

Despite the danger and promise, the rising star gave the Magi reason to believe regime change was possible. If an indigenous king could be restored to the throne of Judah, they recognised a hope for their own restored Persian ruler. Their gifts pointed to the political nature of their mission. This pointed to treason. Ignoring Herod’s request for the whereabouts of the baby, they took home another treason-worthy gift: new hope as they harboured memories of their once-dominant kingdom. As the Persians looked for peace, so did the people of Palestine under the Romans.

God’s presence is found in engaging compassionately and sharing with others and protecting and defending the least. We cannot be content with our ‘faith’ if it does not touch suffering people and ‘the least’ among us. We cannot be content when our church leaders making decisions based on the dollar and remain silent when Indigenous people call for a voice in this land, when asylum seekers languish in detention centres for years, when women voices are ignored, or when our government spends on military hardware rather than social welfare. The One who attracted the Magi also attracted Samaritan adulterers, immoral prostitutes, greasy tax collectors, despised Roman soldiers, and ostracised lepers – and paid the price for that.

We have choices. We can respond to the broadness of God of mercy or contain God within the bounds of our doctrines and imagination? The magi chose another road. They chose to do things differently – to be ‘about the things of God’ - the things close to God’s heart. As we begin another year, we might listen to those seekers, especially young people, who want more than what conventional and ritualised religion can offer. God is always waiting to encounter us anew, somewhere beyond our expectations - bigger than any ritual or tradition and. Epiphany is any time when God appears in surprising places and pushes against our constructed realities. It may surprise us in the places and people where we might meet God. It may also surprise God when we courageously show up in places and situations and be with people because we have taken another road. God is proclaiming to each of us and to the whole church: You are beacons of my love for all the world to see. You are invited to be a part of it all: the glory of God with us, the brightness of the dawn, the gathering of all peoples. You are invited to arise and shine, see and be radiant, thrill and rejoice.

May this holy season be for each of us
a time of moving beyond what is ‘reasonable’
and toward the star of wonder.
God, move us beyond grasping tight to what we have
to unclenching our hands and letting go.
God, lead us to the Light,
moving beyond competition toward cooperation,
seeing that all humans are sisters and brothers.
moving beyond the anxiety of small concerns
towards the joys of justice and peace.
May the transforming acceptance of Mary and Joseph,
the imagination of the shepherds,
and the persistence of the magi,
Guide us as we seek the Truth,

always moving toward the Divine promise,
always aware that God may be hidden in the frailest among us,
always open to the unexpected flash of Grace,
to the showing forth of that Love that embraces us all. Amen