What is it about the innocence of children who speak the truth and try to tell those in leadership that they are naked are so disturbing? A recent example is that of Greta Thunberg rubbished by the likes of people like Donald Trump. We have also witnessed politicians here in Australia chastise schoolchildren who, instead of going to school for a day, schooled the adults of this world, those in power, that they are losing power when they fail to act on the main issues of the day such as the climate emergency.

The gospel puts before us Herod, also afraid of a child, and who is recognisable every day in many places of our world. The murder of the children (the Holy Innocents) is missing from today’s gospel but the dark pall of that event hangs over the story today. That pall is present in so many parts of our world down to our homes. We have more than our share of despots who have pitilessly turned their attention on children and families, maiming, murdering, bombing, raping, torturing and trafficking them. Millions of Yemeni, Salvadoran, Syrian, Kurdish, Honduran, Rohingyan, and Guatemalan children, some alone and some with their families, are forced to flee unendurable conditions to find asylum in safe countries. We are not told how the Holy Family was received by the Egyptians, but it does tell us that they remained in Egypt until it was safe for them to return to Nazareth. Tragically, in our modern times, it has become increasingly difficult for asylum seekers, children as well as adults, to find refuge in safe countries, including our own. Arriving in a safe country does not amount to being welcomed. 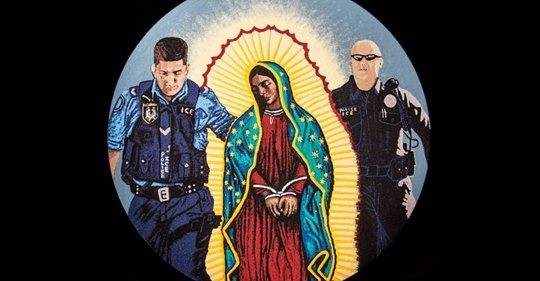 People might ask questions about the heartless way a homeless family is pushed around as it bears the burden of being marginalised in their society; being at the mercy of contemporary historical and political cross-currents; forced to flee into foreign territory – experiences similar to many poor and powerless people today who are subject to the whims of the powerful. There is no happy ending to the Christmas story. This story is bigger, harsher and less romantic than our Christmas Day versions that are kept as unthreatening as possible. God has come among us, and has become part of our aching bodies and flesh, risking vulnerability, abuse, violence and death. Not only do we have people on the move around the world, but people in our communities, often anonymous, whose bodies are aching and waiting for solace but none comes because they are not eligible for basic medical care. We must stop simply repeating the old stories and wait and enflesh a new story of love to be born again and again. It is something our world yearns for. Matthew summarises the escape to Egypt and the return to Nazareth so neatly as if it were no more fuss than a walk in the park. The gaps - the worries about safety, violence, food and shelter – need to be filled in. ‘The irony of Christmas as a race to the top ………is its direct inversion of the baby-Jesus-in-a-manger story. We can easily give that story the Christmas-letter treatment: add a nice filter to the scene, linger on the shepherds and angels, skip over Mary and Joseph as refugees fleeing King Herod’s massacre of local kids, and it’s cosy enough. The airbrushed version of the incarnation’ (Natasha Moore, ‘Let’s lay our Christmas cards on the table,’ Sun-Herald December 22, 2019)

Today’s feast reinforces the fact that God did not just visit us but stays amongst us. God does not sustain and liberate us by remote control but enters the rubble of our often self-imposed failures to raise us up. God-with-us in daily life – the routine and the extraordinary; the victories and tragedies. ‘The spirit of that “incarnation”……..is not positivity but vulnerability. That the invulnerable Creator of everything opts to enter into the chaos and fear involved in being human. To submit to danger and constraint in order to redeem. To go low in order to lift up. The grown Jesus will go on about this upside-downness quite a bit. The last will be first, and the first will be last, he’ll say. Whoever wants to be great must become the servant of all. The birth of Jesus fires the starting gun on a race to the bottom’ (Natasha Moore).

Today’s feast is not just about Jesus, Mary and Joseph. It’s about us. It reminds us that we are responsible for one another – especially those who are most vulnerable. This feast has little meaning if we idealise the Holy Family or project unrealistic ideas of an ideal family upon it. It is easier to manage false idols than the real thing. There is no one kind of family. There are many different kinds of ‘families’: the single parent family; mixed family – a couple have children from difference marriages; childless couples; divorced or widowed people living alone; single people; gay couples; religious communities; people in boarding houses. We are all family. While most of us want a good family life, we sometimes forget that ‘family’ is never a given. We have to create it. Jesus found a new family, a larger circle, the family of God; an ever-widening circle of embrace; a larger household. This is good news for people who have been marginalised from their blood families. Jesus entered into some unconventional relationships with people despite socio-cultural role definitions and restrictions.

We seem to hear only about traditional family as the basic unit of society and church. For Matthew, this kind of family did not form the basic unit of the community that Jesus built. Jesus counseled his followers not to be caught in a net that prevented them from moving beyond the ties of blood obligation to build God’s reign. Remember: Jesus ‘entered into immediate, shockingly unconventional relationships with people, not evading the human encounter by the choreography of the socio-cultural role definitions’ [Monika Hellwig]. Today’s feast confronts all forms of individualism in our culture.

The challenge is love in all places; to extend across boundaries; to offer it where we might not even be supposed to love. It includes, like it or not, our enemies. We cannot allow tighter boundaries be drawn around the universe of acceptable recipients of our love and justice. Otherwise, it becomes godless. Faith does not avoid reality but is concrete. Faith sees the hurts and listens to the grief. It does beyond itself to notice others who are crushed by greed and selfishness.

In keeping with removed sentences about the murder of the children, we need to continue to weep and shout against today’s violence that is perpetrated against the human family. Any sentimentalism about the manger scene must give way to the seriousness of our human predicament. Matthew makes clear, in telling the story of the slaughter of innocents, just how serious things are. On another level, this story is also the memory of Matthew’s community, which can relate firsthand to people fleeing political violence – a story still continued in Iraq, Syria, Nigeria, and parts of Asia today. Matthew’s audience may or may not have had to run for their lives, but they did live under occupation and violence at the hands of foreign troops. Matthew reminds us all that Jesus knows what it is like to stand in their shoes.

Our faith must cause us to rise up against those who want our children for the slave trade, sex trade, to fight in war, and say to those in power, ‘You can’t have any more of our children, our sisters and brothers.’ The churches must be in solidarity with all oppressed people. We need to bring life where others plot death. In these struggles for justice we all find life- and keeps alive the hopes of Christmas. Hope takes root as the ability to express compassion for others develops. It blossoms when people grow in their capacity to take concrete steps to make things different. And where real hope lives, there is also a constant invitation to broader and deeper meaning. As we learn to talk about our own suffering and grief, we become sensitive to the often greater suffering of others. Because hope emerges from processing grief and suffering in community, it draws its practitioners to consider matters from a much wider field of vision. As we grow in our ability to imagine a different world, hope emerges among us.

On the threshold of 2020, let us ask how we might be in solidarity with those need defending and work for policies that protect the rights and dignity of children, all people, on the planet. Let us continue to look to Jesus who was steeped in the beautiful legacy of his Jewish faith to care for and give hospitality to the poor and outcast (the single mother, the orphaned, abused or abandoned child, the sick, the prisoner, the immigrant and the asylum seeker) who have only God to turn to.