In John’s gospel the cleansing of the temple occurs at the beginning of Jesus’ ministry. He is threatening the Temple authority’s power by declaring them unnecessary. Some suggest that that the overturning of the tables in today’s gospel could be seen as his ‘mission statement.’* We see what was in Jesus’ heart. His passion fires his words and actions and expressed as anger. The cleansing of the temple is an action parable. It sets the stage for what is to come. We see how intertwined are Jesus' identity and mission. Jesus is God’s presence on earth who ‘hears the cry of the poor’. God is in solidarity with all who suffer any kind of injustice. ‘I will live among you. I will be a living temple.’

In 2018, a statement was published in response to our government’s intention to be among the top ten arms manufacturers: ‘At the heart of this is the old question: is it about people or about profits? The arms trade does not work to bring about peace but destruction of people, destruction of sentient life, infrastructure and the environment. It does not contribute to the well-being of people. It does not build schools and hospitals. It is does not build roads and railways that serve ordinary people. It is not just another form of trade like the car industry or other manufacturing industry.’** The National Gallery of Victoria also had a powerful painting by Louis Duffy called Christ driving out the money changers which retells today’s gospel story. Sixteen men in business suits are gathered in tense confrontation in a graveyard rather than a temple where the money changers have morphed into arms dealers trading munitions on the graves of the dead with the Jesus character is stripped to his undershirt wields a truncheon. In this provocative incident Jesus disrupts the activity in the temple. We see how God is present in our midst who calls us to active justly. 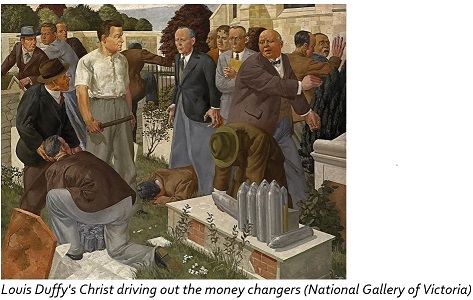 Our country is being prostituted by its willingness to join the ‘merchants of death’ as Pope Francis calls them. Australia currently provides $43 million in arms to the Philippine government which commits gross human rights violations. And it is not just the Philippines that we trade in arms with. Arms have one purpose – to kill and destroy people created in God’s image and likeness.

The marketplace mentality is all around us. Jesus acted radically to eliminate injustice and greed. We are called to guard against practices that shut out or discriminate against the poor. In Fratelli Tutti, Pope Francis has joined hands with Jesus in decrying the excesses of our global system which allows for gross wealth for a few, excessive wealth for many in developed countries, and desperate and degrading poverty for many others. These imbalances have been intensified by the COVID-19 crisis. He writes, ‘Nowadays, a firm belief in the common destination of the earth’s goods requires that this principle also be applied to nations, their territories and their resources...[If] all people are my brothers and sisters, and if the world truly belongs to everyone, then it matters little whether my neighbour was born in my country or elsewhere. My own country also shares responsibility for his or her development, although it can fulfil that responsibility in a variety of ways.’ (124) This does not reflect the equal dignity of all persons as created in God’s image. Jesus did not lose it because the cheating occurred on holy ground but because people were being extorted in the name of religion.  It is wrong in any place or time.

As one in whom the very presence of God dwelled, Jesus could readily call himself a temple. John has told us that Jesus, the Word of God, became flesh and pitched his tent among us (1:14). In Jesus, God became present to us in flesh and blood, in time and space. But, we too are temples, places where God has chosen to take up residence.

As compassionate lover of justice, God is on the side of the oppressed. To oppress or sin against the poor is to sin against God, to deface God (cf. Proverbs 14:31), or to ‘spit in the face of God’. Each Church community is a ‘house of prayer’ but we cannot close our eyes in prayer in order to overlook injustice. We break the commandment of taking God's name in vain when it is used to justify war, or claim that we make peace by going to war, or use God to justify our prejudices, e.g., ‘God hates………’; ‘God says……’ I would have had a problem with Jesus had he not expressed anger and had remained silent as do so many leaders in the face of injustice, oppression and other acts of violence. Let's be clear that Jesus' anger is not directed only at those who commit injustice but at those who do not see, will not see, stay silent, are not scandalized, saddened, and lacking in passion. This Gospel shows Jesus in opposition to any person or group that colludes with the idols and powers of the world and hides God’s presence by neglecting the practice of justice.   The gospel confronts religion that is mixed up with power, money and authority. Worship that ignores the destruction of life seeks to avoid responsibility for nonviolently standing up against evil is not worship.

The ‘new temple’ is made of human beings and God's people do not need to rely on acts of ‘sacred violence’ to remain bonded together. The community will be bonded together through service rather than scapegoating violence. Pope Francis has spoken of people becoming ‘little monsters’ when their hearts are not attuned to humble service. We can all be caught up by prejudicial ‘isms’ that divide by rank, race, class, education, gender, age, sexual orientation, etc., which cause much pain and dehumanise their practitioners. The privileged place of God's presence is not a building but in Jesus and our humanity and the humanity of the other. The building serves as a place to symbolise our unity and challenge us in our mission. And sometimes that building needs purification!

Jesus denounced a temple that concentrated power in service of the privileged, took advantage of some, and condemned and excluded others.

Would he foster the attitudes that reject some people because they are different sexually, or economically challenged, or of a different skin colour or Nation? Would he condone decisions made for financial gain or the use of money to hide wrong-doing?

Jesus’ heart was open to others – to Samaritans, and women, and tax collectors, and children who others thought were too noisy and should be sent away. He welcomed a Roman soldier who occupied the territory as a conqueror, and ate with the Jewish authorities who eventually rejected him. The love and compassion of Jesus was boundless and embraced all. When violence and hate were present, he overturned it.

Jesus challenged the foundation of worshiping 'money' and the practice of narcissistic consumerism. John Kenneth Galbraith in The Affluent Society wrote that money has three fundamental advantages: first, the sense of power on derives from it; second, the ability to own everything that money can buy; third, the prestige and respect bestowed on rich people because of their wealth. We see in the gospel that the Temple has seen its day and Jesus – the new temple- is its replacement. Instead of allowing us to believe God is wrathful and in need of being paid off to placate his wrath, Jesus undercuts this by showing us that God is nonviolent, not wrathful; that God is compassionate, loving and forgiving. The new temple is not separate from the world but fills it completely. No one is excluded. There is no inner and outer chamber. Jesus is for all people. This temple doesn’t take life, it gives it.