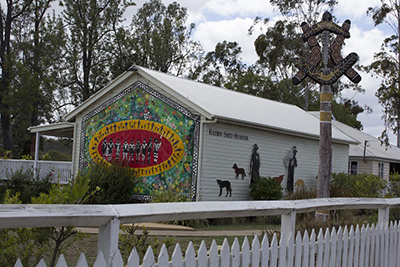 Cherbourg is located 265 driving kilometres north-west of Brisbane and was originally started as a Salvation Army Aboriginal mission known as Barambah in 1901. In 1904 it was taken over by the Queensland Government and renamed Cherbourg in 1932. Aboriginal people across Queensland were forcibly removed and placed on the Cherbourg reserve under the 1897 Aboriginal Protection Act of Queensland.  Many different clan groups were forcibly removed to Cherbourg to be assimilated into European culture and way of life. Under the protection act people were strictly controlled under harsh conditions. Food rations were dispensed from a small timber shed. A history of Barambah/Cherbourg can be found on the Cherbourg memory website.[1]

The suffering and deprivation endured by the Cherbourg community has served to fuel the passion of the community to tell their stories of resilience and how they have survived injustice and disadvantage. Elders such as Sandra Morgan, Lesley Williams and Aida Simpson, were passionate about recovering the memory of their community. They approached Cherbourg Council to relocate the old ration-shed building to an area in the heart of the Cherbourg community to preserve Cherbourg’s history as a colonial Aboriginal settlement. The ration-shed holds special meaning and memories for Cherbourg people. It was the place where people would queue for their rations of flour, sugar and tea. Cherbourg Council agreed and the ration shed plus the superintendent’s office were relocated and restored as a museum with a grant from the Queensland Government.[2]  A recreational /cultural area was established and this also included the construction of a ceremony ground.

Sandra Morgan and Aida Simpson then lobbied for a permanent “keeping place” where people could tell their stories of what life was like for those who grew up on Cherbourg when it was a place of government control and discipline. They believed that by telling stories it would bring healing and re-connection for their people, which in turn would reconnect their young people to the values of culture and revive pride in what their community has done. This became known as the “Memory Project”.[3]

Funding was secured for “The Cherbourg Memory Digital Archive” to tell the story of the Cherbourg community and the stories of people. Since then there have been numerous grants for other programs that tell the history of Cherbourg including the “Boys from Barambah Project” which involved renovating the old dormitories where the boys were once housed at Cherbourg.

The ration shed, the superintendent’s office and the dormitories are filled with meaning and memories for Cherbourg residents who were interned under protection and assimilation policies. While they suffered loss and grief at their forced removal they also experienced fear, punishment and control. However the museum reflects a positive community spirit forged through adversity and hope.[4] Like other Aboriginal communities, Cherbourg is still affected by historical and structural injustice. Many older people have the memory of the pain and struggle; when they were controlled and disciplined by the Superintendent and the Chief Protector. This trauma continues to impact on succeeding generations and is evident in contemporary social issues that impact on the community.

The Ration Shed Historical and Cultural Precinct reflects on the history of Cherbourg through the eyes of its people and also celebrates contemporary Aboriginal culture and present-day life in the community.[5] It provides historical information and research to the wider public, government and the community and also provides space for community activities and celebrations. The Ration Shed Historical and Cultural Precinct speaks directly to the resilience of not only the women elders but that of the whole Cherbourg community. This is shown by the positive determination of the Elders to display the history and achievements of their community. As Sandra Morgan explains: “with Cherbourg there have been harder times but when we decide to do things, we do it from the heart.”

The importance of story and memory were motivating factors, especially having a permanent “keeping place” to tell stories. Stories of what life was like for those who grew up on Cherbourg under harsh conditions when it was run as a government controlled settlement. Telling the stories bring healing and re-connection for the people at Cherbourg and re-builds a new sense of community. In this way the elders and the community can reconnect their young people to the values of community and culture and a pride in what their community has done.

Since its official opening as a museum in 2009, the Ration Shed has continued to grow. Many arts and cultural programs have been conducted at the precinct such as the Shadow Box Project, the Re-fire Pottery Project, the Many Threads Project focusing on women’s experiences of family, friendship and well-being, the Aboriginal ANZAC Project honouring those from Cherbourg community who served in the various wars and the HIPPY program - a home-based education intervention program for young mothers and their preschool children.

These projects connect community together and reinforce their sense of identity as Aboriginal people. The establishment of a recreational /cultural area including the ceremonial ground has been especially significant as it has rekindled interest in culture and has enabled Elders to work with young men about learning song and dance.  Some young men have even been taught to be “song men” for the Cherbourg community. The Elders at Cherbourg are keenly aware that by passing on culture to young people it will make them strong in heart and spirit thereby strengthening their identity.

The Ration Shed is a source of pride for Cherbourg community. Not only has it been a morale boast for the community, but it is a source of income and employment opportunities for many local people including builders, artists, and staff. It serves as a base for promoting community and cultural events and as such is the main cultural hub where people can gather and meet. The Ration Shed symbolises the resilience of people in Cherbourg.  The stories of adversity, endurance and achievement contribute to forging a diverse group of people drawn from many clan groups across Queensland as “one mob” who can look to the future with a sense of purpose and united identity. This is what Aboriginal resilience looks like in Cherbourg.