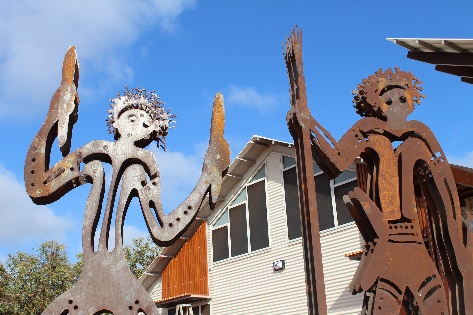 In April 2006 the Federal Court declared the Yawuru people as native title holders of land and waters in and around the town of Broome in the Kimberley region of Western Australia. The Yawuru were able to establish that they have maintained spiritual, cultural and social connection to their land and waters through their traditional laws and customs.

The recognition of native title has provided a way for Yawuru to rebuild their social and cultural structures to support family and community, to look after country and create an economic future for themselves. Central to Yawuru aspirations to creating their future is their philosophy of mabu liyan (good liyan). Liyan is a feeling derived from touching, eating, feeling, being and doing. It is also about how a person relates to others and to their surroundings and to the environment. Mabu liyan arises from connection to family, community, country and culture as well as a good standard of health and living, safety and respect and rights and recognition.[1]

“Liyan embodies the interconnectedness between a person’s sense of self, the wider community and the natural landscape. Yawuru people’s connection to country and joy of celebrating our culture and society is fundamental to having mabu liyan (good liyan). When we respect country and look after it we have a good feeling about ourselves as people and our place in the world, and this is reflected in the nature of our relationship and encounters with other human beings”. [2]

Yawuru resilience is reflected in their maintenance of traditional laws and customs since colonization. Like the experience of all Aboriginal groups, the Yawuru were extremely marginalised and when they made their native title claim they were given very little credence. But the native title determination proved there is an underlying Yawuru strength, a continuing belief system and continuing connection to their country. However, Peter Yu insists that ongoing Yawuru resilience is tied to economic success because social and cultural resilience is unlikely to be achieved without economic resilience. He says native title has provided the basis for Yawuru success.

Two Indigenous land use agreements signed with the Shire of Broome and the Western Australian State Government in 2010 created a range of opportunities for Yawuru. Opportunities, Yawuru would not have had if there was no recognition of native title rights. The agreements cover approximately 5,300 square kilometres of land in and around the town of Broome. As part of the agreements future land development and heritage issues were resolved to free up land for residential and industrial development, tourism, and an airport.  In return the Yawuru received monetary benefits for capacity building, preservation of culture and heritage, economic development, social housing and joint management of a conservation estate comprising conservation areas along the coast and a marine park covering much of Roebuck Bay. The agreements also provided land to the Yawuru for development and cultural heritage purposes.

Peter Yu points out that native title has given Yawuru the ability to obtain capital assets and this in turn has enabled Yawuru to give greater definition to the capital value of their country, language, ceremonies and customs. Nyamba Buru Yawuru a private company responsible for generating income from Yawuru’s capital assets incorporates commercial success with the philosophy of mabu liyan. Yu says it is not an easy task building and enhancing mabu liyan while at the same time running a commercial business.  In the first instance Nyamba Buru Yawuru must deliver benefits for the well-being of the Yawuru community and secondly it must ensure benefits also flow on to the broader community for the well-being of the town. He is mindful of the expectation from the broader community that Nyamba Buru Yawuru must perform and “pull its weight”. In that regard he says Nyamba Buru Yawuru must operate as a commercial business rather than just be another Aboriginal organisation. He says building relationships with the Shire of Broome and the Chamber of Commerce is part of that commercial success.

Since the signing of the Indigenous land use agreements Nyamba Buru Yawuru has carried out a range of initiatives. One of its first tasks was to set up the Mabu Yawuru Ngan-ga language resource centre to ensure the continuation of the Yawuru language. Today Yawuru language is taught to school children in Broome and there is a study program for Yawuru adults. The aim is to have 20 Yawuru language speakers by 2021. The Yawuru Ranger program was established with the Department of Parks and Wildlife for the training and employment of Yawuru to look after country. Yawuru country managers also work in Yawuru Indigenous protected areas undertaking land and cultural management projects. The Yawuru home ownership scheme has enabled eight young Yawuru families to buy their own homes. Roebuck Plains Station a successful pastoral property on Yawuru country is now owned by Yawuru although it is leased by the Indigenous Land Corporation to run a cattle operation.

A key initiative is the Liyan-ngan Nyirrwa Cultural Healing Centre. The centre will allow Yawuru to deliver cultural and community development programs using their own cultural strengths to empower the community. Programs will be grounded in the philosophy of mabu liyan. Yu describes the Liyan-ngan centre as a contemporary and physical manifestation of reasserting Yawuru values. It will provide an opportunity for senior and young Yawuru people to work together to develop an understanding of the value of mabu liyan and to ensure the transmission of knowledge and understanding on Yawuru terms. A major focus will be on young children in their formative years, 0-6 years of age creating a Yawuru cultural environment for them to grow.

Peter Yu states that operating for commercial success does not mean that Yawuru are succumbing to a Western economic lifestyle along with its associated negative features. The distinguishing elements of success according to Yu, is the interconnecting nature and force of mabu liyan which will drive success in a Yawuru way. He asserts Yawuru are trying to define and reinvigorate mabu liyan as a commitment and purpose in the way Yawuru live their life and, in the way, they engage and do business. This puts Yawuru in control of negotiating their destiny. He also points out that mabu liyan is not just for Yawuru because other Aboriginal groups have a similar belief system.

Dysfunction and marginalisation are consequences that colonised peoples must deal with and for Yawuru the recognition of native title has provided potential opportunities in that regard. Peter Yu explains that Yawuru are trying to build a cycle of success and a key element is unity of purpose in the community. In that context Yawuru must have “modern weaponry” such as corporate structures and expert advice. Equally important the community must accept the responsibility and own the risk of change. But to be able to do so they must have the capacity and the confidence to make decisions about their future plus have accountability mechanisms so there is transparency as well as have an environment in which to conduct respectful discussions if there is dissent or alternative points of view. Yu says this is where mabu liyan is relevant to achieving unity because informed consent is a key element of change.

Building and enhancing mabu liyan has application across the spectrum of life for Aboriginal people in general. It is particularly appropriate to the issue of high Aboriginal incarceration rates. While there is no silver bullet for the high incarceration and recidivism rates, Peter Yu believes the assertion and recognition of native title can present opportunities to deal with such issues. Being able to physically visit country to fulfil cultural obligations can have a dramatic effect on an individual or a community. He argues native title can be leveraged to rebuild social and cultural practices providing a sense of purpose to focus the mind and create a sense of discipline. So that when people reconnect with their country and their language they feel good about themselves and this builds confidence and purpose in life.

Peter Yu has seen the extraordinary growth of confidence of Yawuru resulting from their approach and the incorporation of mabu liyan into their corporate structure. He says Yawuru have been involved in an adaptive cultural process where they have reorientated themselves towards their cultural knowledge and practices but have also embraced the reality of Western economic success. Cultural knowledge and practices such as mabu liyan have always been there, underlying Yawuru life. But due to historical circumstances they have not always been publicly acknowledged and promoted. The native title determination has empowered Yawuru to give greater focus and definition to their knowledge and practices in a contemporary context. This has provided a fascinating juxtaposition in Yawuru development. For the first time in 40 years Yawuru have conducted cultural ceremonies on their traditional country while simultaneously negotiating their first joint venture construction company deal.