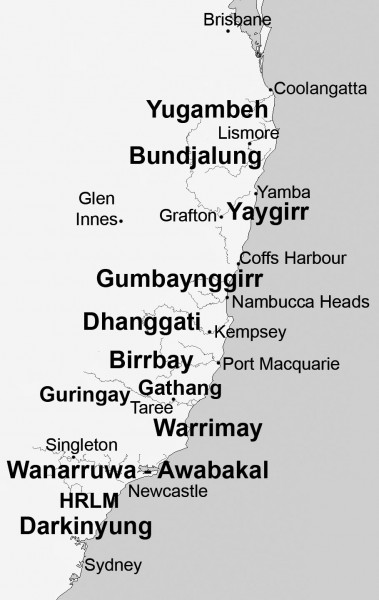 The Vision of the Elders

In 1986, several Elders of the Gumbaynggirr people - Uncle Andrew “Pop” Pacey, Aunties Maggie Morris, Jean Drew, Joyce Knox, Jean Brown (Ballangarry) and Ivy Smith (Long) - aspired to revive their language.  They secured the help of Steve Morelli, linguist teacher and formulated a plan to recover the language. This process began with sourcing the last remaining recordings of the language to reclaim the full vocabulary and grammar.

In 1992, after securing federal government funding, these Aboriginal leaders published the very first Gumbaynggirr dictionary-grammar.  In 1997 Muurrbay was registered as a Training Organisation (RTO) through Vocational Education and Training Board (VETAB) offering language classes. In 2004, it expanded to become a regional language centre, supporting and teaching a further six languages. Then in 2014, Muurrbay received additional funding to revitalise languages.

Since 1998 Muurrbay has been offering two courses, Certificate II and IV in Gumbaynggirr Language and Culture Maintenance. Both courses are accredited by the NSW Vocational Education and Training Board. Hundreds of adult students have participated in these courses. When accreditation lapsed, Muurrbay applied in 2015 to the federal government program ASQA (Australian Skills Quality Authority) for re-registration as a Registered Training Organisation (RTO) and for the accreditation of a new course: Certificate III in Gumbaynggirr Language and Culture Maintenance.  In 2016 ASQA granted both RTO status and registration of this course.

The registration of Muurrbay as a Registered Training Organisation (RTO) means there is the continuation of a certification process that recognizes Gumbaynggirr language as a significant part of culture being recovered and promoted. This certification has further enabled the professional training and employment of local Indigenous people in teaching of language. As result Gumbaynggirr is taught both in the local primary and secondary schools. Already, several high-school students have completed studies in Gumbaynggirr language for the High School Certificate. There are also adult language classes for both Indigenous and non-Indigenous people. By the end of 2017, fifteen Aboriginal students had completed the first year of this two-year course.

Muurrbay has collaborated with local council, government and community groups about the appropriate use of Aboriginal history and names in signage of buildings, streets and parks, for example the hospital wards in Macksville. The naming of the local motorway “Giinagay” which means “Welcome to Gumbaynggirr country” has received popular support in the wider community.  Muurrbay enjoys considerable respect from the academic world with universities keen to further linguistics studies through partnership in research. Muurrbay has for years revived and shared Dreaming stories which has resulted in the establishment of story-place signage in the Gumbaynggirr area. The publication by Muurrbay in 2017 of “Gumbaynggirr Dreaming Story Collection – Gumbaynggirr Yuludarla Jandaygam” has encouraged such further signage.

The success of language recovery has led to the expansion of language services for Muurrbay Centre. These now include the teaching of, and the publication of dictionary /grammar books, for another five Aboriginal languages across the Northern Rivers, Mid-North Coast and Central Coast of NSW.

Restoration of Gumbaynggirr language has had a huge impact on people’s sense of cultural identity and has motivated the recovery of traditional stories. The recovery of language has been a major catalyst for other cultural expressions which are used in local ceremonies and events such as funerals where the theme of “moving on to a special place” has special significance. The women’s art group has also been involved in a community project at Nambucca Heads telling local traditional Aboriginal stories. There is also renewed interest in Aboriginal music using Gumbaynggirr language and the use of photography to capture elements of local stories and people.

The recovery of the Gumbaynggirr language, the publication of a vocabulary/ grammar dictionary and a book of stories has had important flow-on effects for the local Aboriginal community. Muurrbay has been led and motivated by key Elders, who have brought a renewed sense of pride in culture and identity for the Gumbaynggirr people. Gary Williams, CEO of Muurrbay, and Elder of the local community, explains that for him, Muurrbay means, “a general feeling of well-being at personal and communal level and a professional pride in the work achieved in passing on language.”

The establishment of Muurrbay Centre to maintain and promote language and its success reveal some remarkable qualities of the local Gumbaynggirr Aboriginal community. The most obvious is the wisdom of elders and the strong sense of community cohesion among the Gumbaynggirr people at Nambucca. The strong respect for the Elders and amongst the whole community displays this cohesion. The community worked together to achieve a common good. Lead by elders they co-operated and collaborated to support the revival of language through story sharing in traditional language using different cultural expressions. The building of the language centre has created a community meeting place where culture and community were re-invigorated through the revival of language, art and music. The sense of community cohesion is reflected in the achievements of the Muurrbay Centre and there is a sense of identity and pride in being Gumbaynggirr people.

The Gumbaynggirr Elders maintained a belief in the strength of their culture. They had a practical vision of the future, inviting their community to share in the vision and inviting professional people to assist revive the language. From there they pursued funding for programs, professional training of local people as language teachers which resulted in Muurrbay being recognized as an RTO.  Then, to guarantee Muurrbay’s work into the future, the Elders and community formed a Co-op to sustain the future vision and governance of Muurrbay and its programs.

Muurrbay Aboriginal Language and Culture Co-op stands as a proud testament to the resilient qualities of the Gumbaynggirr people, a people with a sense of community cohesion and strong leadership. The wisdom of the Elders who maintained a belief in the strength and uniqueness of their culture and in their community was an important factor in reviving language and connecting to culture.  They wanted to pass their language on because they knew it would lead to reconnection to community, culture and identity.

Strong leadership by the elders with a clear vision of the teaching and passing on knowledge and practices to the young people and families kept the momentum of language revival growing, evolving and reconnecting community to culture. Strategic decision making by the elders and the community enabled establishment of the Muurrbay Centre and the revitalisation and teaching of language. A strong sense of community cohesion among the Gumbaynggirr facilitated cooperation and collaboration to support language revival and language teaching thereby reconnecting the community to their country and culture and in the process strengthening identity.