32nd Sunday of the Year

Widows figure prominently in today’s readings as pictures of poverty and powerlessness – people exploited not just by Israel’s religious institutions but by institutions through to the present.  Jesus' concern was for vulnerable people – people who suffer at the hands of international money markets, global agribusiness and corporate monopolies. The extremes of poverty, oppression, violence, inequality and the Covid-19 pandemic all bear a female face – women often being its victims as evident in places of conflict, war, famine and wholesale illness.

At a recent two day conference (October 23-24), ‘Solidarity, Cooperation and Responsibility: The antidotes to fight injustices, inequalities and exclusions,’ Pope Francis said with many people facing exclusion and inequality around the world, Catholic social teaching points to new ‘people-centred’ economic systems represented by solidarity, cooperation and responsibility. These ‘three pillars of the church's social teaching,’ puts the human person at the centre of ‘the social, economic and political order.’ It means, we cannot ‘remain indifferent’ to those affected by economic systems that ‘discard people's lives in the name of the god of money, fostering greed and destructive attitudes toward the resources of the earth and fueling various forms of injustice.’ Francis says, we must be inspired by Jesus’ teachings and care for others with a ‘love that transcends borders and limits,’ and witness that we can pass beyond the walls of selfishness and personal and national interest to develop a more just and equitable society where forms of selfishness and partisan interests do not prevail.’

The Responsorial Psalm (145) today provides a way to interpret today’s readings, and the Bible. We are reminded of God’s concern for the poor by securing justice for them: food to the hungry; freedom to prisoners; sight to the blind; protection for the stranger (immigrants and refugees); and care for the motherless child. God also has special place in his heart for those concerned with justice for the poor.

In Mark, the woman’s generosity is questionable alongside so-called ‘values’ where doing for others in careful and minimal doses. We criticise poor people for their spending decisions – as did this widows who gave away her last means of support. Though lauded for her generosity, the gospel is more concerned about with poverty and oppression.  It is a summary of Jesus’ attitude towards clerical corruption in his own day – and in our own. He was concerned with their heartless exploitation and ostentatious displays of personal piety and moral uprightness. In the first reading, Elijah used his 'clerical’ power to have his needs met as did the scribes in the gospel. This woman who is trying to survive a famine and a lot is asked of her by Elijah. When she expresses her vulnerability, he tells her not to be afraid and trust in God!! The gospel story cannot be read in isolation of Jesus’ earlier condemnation of the scribes in the temple and reference to some systems of social inequity and imbalance in the religious, political, and social structures of his day: ‘Beware of the scribes, who like to go around in long robes and accept greetings in the marketplaces, seats of honour in synagogues, and places of honour at banquets. They devour the houses of widows and, as a pretext recite lengthy prayers. They will receive a very severe condemnation.’ The standard way of treating this reading runs like this: (1) The widow in the Temple donated to the temple priests ‘all she had to live on’ and was rewarded with Jesus’ praise; (2) follow her example (3) donate generously to your priest and you will be richly rewarded either here, in heaven, or in both places.  If Jesus was warning us about the scribes, what might he be saying about clericalism?  He had warned us about those who always took ‘seats of honour in synagogues and places of honour at banquets,’ but we fail to ask who let them sit up front or who decided that what they represented was most important. We show preference to politicians, religious leaders and leaders of corporations who are indifferent to the poor and who blame the poor for their choices and social situations. The former support tax cuts to the rich and powerful, increase military budgets to the neglect of neighbouring countries in the Pacific, and cut disaster payments to the poor and unemployed during a pandemic.  It is among these latter people that we find God - if we would just look. Nadia Bolz-Weber in her excellent book, Accidental Saints: Meeting God in all the Wrong People says if we look, we may find God in all the wrong people and places. Pope Francis too continually reminds in word and action to keep our eyes on the poor and not allow ourselves to separate or isolate from the ‘those overlooked and locked from society. Despite her generosity, neither Jesus, nor Pope Francis, would expect poor and vulnerable people to give away their very last resources that would deprive them ‘of their whole livelihood’. We cannot enter God’s Reign by closing our eyes in prayer to overlook injustice: the treatment and detention of asylum seekers, domestic violence, abuse of children, past atrocities against indigenous people from which they have  not recovered; treatment of people who have divorced, former priests, gays and lesbians, Muslim people. The world has not changed: people are still poor; people still seek asylum and safety; women are still marginalised in the church and society; gay and lesbian people still ‘othered’, feared and vilified. Jesus notices! We are called to notice. Clearly, we return to the teaching of the Gospel where what we do for the least of our sisters and brothers, we do for Jesus.

The women, as women in general, are left vulnerable in religious and social institutions that Jesus laments. The woman’s generosity in Mark images God’s giving all to wounded and suffering humanity. The Gospel of Thomas casts the woman as a symbol not of the disciple but of God. Her willingness to part with everything she has to live on reflects the God who loses everything when encountering human beings; whose investment in people means wood and nails. She represents nothing other than what the whole gospel is about – God’s bighearted self-giving in the person Jesus.  Love is always in the red.

The structure of our Church and society still leave women vulnerable and on the margins despite what they have to offer. It shows how broken our church is. These readings certainly call us to lament and to confront the challenges and graces of discipleship. These women certainly model for us how to be in the brokenness of the world and to offer ourselves generously. Much like the models of women in these readings, how are we preparing ourselves not only to give generously but even from our poverty?  How do we allow our titles, honour, ego, or our reputation prevent us from being present to others?  What needs to happen for us to be more attentive to the ‘widows’ of our world and show us the way of true discipleship? The women in these readings show us that there is a brokenness in our world leaving them vulnerable, and like them, we must have faith, we must be courageous to see the brokenness, and we must act generously from our own poverty.

God of widows and foreigners,

teach us all to be more open today

to the truth that you bring us 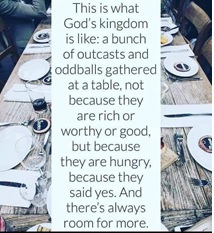