This Gospel’s traditional title fixates on the woman’s wrongdoing leading preachers to focus on sex and sin and Jesus’s final exhortation, ‘From now on, do not sin anymore’ which misses the more insidious brokenness of a society and faith that would sacrifice a woman’s well-being to shore up the value of men and their power. Jesus words, ‘Go, and from now on do not sin anymore,’ has been weaponised by people wishing to condemn others, such as LGBT people or sex workers, to justify telling them how to live their lives. To isolate this line from the rest of the text means we lost the whole spirit of the gospel message about not judging and to offer each other mercy.

We have often assumed that the accusation against the woman was true which means we have read this passage through the lens of adultery and sex outside of marriage. If she had been caught ‘in the act’ where was her partner who would also be condemned? Would she even have been believed if she denied the charges?  This incident occurs just before Jesus is handed over on false charges of sedition. The intention was to trap Jesus. They could not fault him. They had to look for ways to charge Jesus so he would be restrained from doing his ministry. They had to stop him from propagating a radical and liberating teaching that enabled the poor, widows, women and children, people who living with leprosy, farmers, fisher folk and those designated as ‘sinners’ to open their eyes to their oppression, their marginalisation and exploitation. Opening their eyes was seen as threatening. Jesus expressed God pathos by being with the vulnerable and upholding their dignity. In the gospel, we see a person being used to trap Jesus. If Jesus would condemn the woman, then he would be accused of lacking in compassion and mercy. If Jesus would not condemn the woman, Jesus will be judged as a violator of the law. Jesus shows compassion and justice to a woman who was humiliated and shamed by the instruments of hate, self-righteousness and tyranny.

God’s intention is to renew and revitalise the chosen people. It often happens through upheaval, chaos, and diminishment.  According to Isaiah, seemingly hopeless situations can be renewed by God who does not ever give up on us - as we heard in the parable of the fig tree two weeks ago. God always wants to renew us and to be open to ‘something new.’ In Isaiah, the people in exile are offered a hopeful vision with God’s comforting words: ‘No need to think about what was done before. Look, I am doing something new’. Their future lay beyond things they had lost such as the monarchy, the temple, the priesthood, the festivals, and the land, to a new community consisting of hospitality, justice, compassion, and neighbourliness. It was a relationship that grew beyond the physical symbols of land, temple, and rituals into new horizons of love, compassion and justice. This is the new community. Suffering the loss of status symbols of power and being reduced to statelessness is not unlike what Palestinians experience today.

The so-called ‘war on drugs’ in the Philippines has not been in the news lately where more than 30,000 people have been murdered by the government under the pretext that people who are addicted to drugs are criminals. Most of these were the poor. In many cases, other people were tagged as dealing in drugs and killed in private vendettas. Very concerning has been the ‘tagging’ of lawyers, teachers, doctors, religious people as opponents of the government, indeed involved in terror, that has lead them to dragged out of their houses and killed on the pretext of not having surrendered peacefully. Many peasants and farmers have been tagged as members of the New People’s Army, who like the woman in the gospel who was accused of adultery where the law was used in order to justify these violent actions. These are happening in the USA, in Russia and Israel. We need to find ways to embody God’s empowering love and mercy. The challenge for us as Church is to realise that God’s newness of life is found when old boundaries are crossed, hurt is noticed, and the weak are honoured. We must have the courage to become an alternative community of justice, compassion, and solidarity.

We are constantly challenged how we use power and privilege that objectifies people, especially women and other vulnerable people, and the assumptions we make about them in terms of sexuality, gender, and colour. As the war in Ukraine rages, and wars abound in Africa and parts of Asia, women become objects as rape is used as a weapon in wars that men usually begin. Each side demonises and dehumanises the other.

On International Women’s Day (March 8) we heard again of world-wide violence against women and were invited to image a gender equal world free of bias, stereotypes, and discrimination; a world that is diverse, equitable, and inclusive where difference is valued and celebrated. Today, Jesus is a victim of violence as the intense violence and injustice towards the woman who is publicly humiliated as a means to an end: to trap Jesus. Emotional abuse and physical violence against this woman are the pretext to threaten a man daring to live beyond the confines prescribed by his faith and culture such as consorting with the wrong kind of people. This woman is threatened as are women and gay people in Afghanistan, Saudi Arabia, Iran, and parts of Africa. We saw this last Sunday in the story of the prodigal son where the religious leaders looked for ways to get at Jesus who was touching the so-called ‘undeserving’ who clung to his words. The story of radical love also goes to the heart of the ‘debate’ between Pope Francis and his critics who complain that the strong emphasis on mercy is damaging the institution of marriage (cf. Amoris Laetitia). In fact it was the opposite. Francis is calling for a pastoral accompaniment that truly expressed the love that Jesus preached.

So, Jesus stands with the woman, He representing the God who refuses to shame, objectify, demonise, or dehumanise. He reveals the God who sits with the so-called sinners and refuses to marginalise them, shame them, and condemn them.  As with the people in exile, the negative brings about a positive. Little did those who scorned Jesus for eating with sinners know that they were bringing him in touch with people who needed their dignity emphasised as in the case of this woman. In their attempt to damn her, they unwittingly brought her into the arms of love and relationship.

Today, we are invited to contemplate Jesus as the embodiment and sign of God who continues to bring about something new. It comes about when we stop dwelling on the past and see what is possible with God’s love. The new thing in today’s story is the good news of God’s mercy as Pope Francis reminds us. Here is the reality of God’s love and mercy amidst injustice and abuse of power. Jesus is not influenced by law or oppressive power looking for the goodness that resides (hides) in people’s lives. He used truth and justice (right relationship) to defend the vulnerable like many people in many situations and often also pay the price for that.  The hypocritical behaviour that brought the woman to Jesus exposes his sensitivity to injustice, the needs of poor, disadvantaged people, and women who continue to be pushed to the margins in terms of gender, social, economic inequality and accompanying violence. Jesus has quietly decreed his own Violence against women legislation - and acts it out. His position is quite different from that often taken by church leaders and other faith leaders today.

We are called to join the human race, to be in solidarity, but also acknowledge that we all carry a stone or stones of some kind with us: of jealousy, resentment, frustration, prejudice, and superiority towards others (women, Muslim people, asylum seekers, gay and lesbian people, people who are poor in any way). That stone may be the failure to acknowledge the injustices women suffer in society and a male-dominated church. In many places, women still cannot move freely without fear of harassment, assault and humiliation. Pointing fingers, judgmentalism and self-righteousness puts us outside that human circle. The ‘new thing’ is solidarity. The old is ‘isolation’. Let’s hope that the accusers begin to see the world from another perspective and grow in compassion and empathy. Jesus says, whatever we do to the least amongst us we do to him or for him. How might we enter into the suffering of those brothers and sisters—the sick, the poor, the homeless or hungry, those who are alone? Maybe the most ‘religious’ thing we can do is to extend a loving acceptance towards people who have difficulty doing what is 'religious' and 'right'.

Following the example of Pope Francis, our first question in these situations should be, ‘Who am I to judge?’ The next and equally vital question is, ‘Who is suffering in this situation and what are we called to do about it?’ Those questions won’t generate the cathartic unanimity of a mindless mob, but they can lead us to create communities of forgiveness and hope in which all can live and live well.

God of life and death,

meet us as we are,

with whatever hope, despair, or longing fills our hearts.

Bless our living and our loving;

Bless our families both given and chosen.

Bless our embodied rituals of adoration, our sacraments of sensuality.

Hasten the transformation of our weeping into joy. 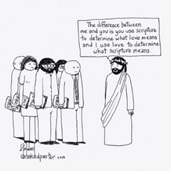