Eighth Sunday of the Year

We have a rich array of themes that lead us into the Lenten season of conversion and renewal. Luke today contains three separate sayings by Jesus on mercy: the blind leading the blind, the splinter in a companion’s eye, and a good tree and its fruits.

The Gospel calls us to examine ourselves as to what we may have to leave behind in our lives and what changes may be needed, e.g., how we view other people and the judgements we make about them. How do we view or judge people who are in need? While we are confronted with people going berserk with violence, people living in poverty and under-development, there are many stories and situations where people try to be in solidarity with people facing many challenges. Two weeks ago, I quoted Howard Zinn, who speaking of hope said, ‘…is based on the fact that human history is a history not only of competition and cruelty but also of compassion, sacrifice, courage, and kindness’. Violence and solidarity have co-existed in spaces where some people have been brutal and nasty to others whilst others have been in standing present in solidarity with victims, e.g., people seeking asylum around the world from the Mexican border to the detention centres in Australia and throughout various European countries.

When it comes to structural sin that permeates society such as materialism, (hetero) sexism, consumerism, individualism, and other attitudes that are ignored and blunt our consciousness.  They have become mainstream, normalised, and socially acceptable that blind us and numb us in our responses. Referring to ‘blind guides’, Luke calls us to question the opinions we hold and to be cautious about where we look for guidance. Bertrand Russell once said, ‘Fools and fanatics are always so certain of themselves, and wiser people so full of doubts.’ We need to be ready to admit our limitations in the way we perceive others, what is going on in their lives, what had brought them to the present situation. We need also be prepared to admit our incapacity. Today’s gospel elucidates Jesus’ words spoken earlier: ‘Be compassionate, just as [also] your Father is compassionate’ (Luke 6:36). These need to be the lens through which we make our judgements. The blind guides Jesus referred to are those who do not know their own need for mercy or have not experienced mercy or compassion in their lives and thus are unable to act with mercy or compassion. Jesus’s words probe and prod us even more deeply. Last week, Jesus said to his disciples and to us: ‘Love your enemies, do good to those who hate you, bless those who curse you, pray for those who mistreat you’ (Luke 6:27-28). We don’t often talk about enemies in polite circles but use euphemisms such as ‘that other group’ or ‘those people’ or phrases like ‘our own kind’ or ‘people like us’. Splinters and logs can help us distance ourselves from those ‘others.’

Sirach warns us today, ‘One's faults appear when one speaks.’ This is as an invitation to speak less and do more listening. It might sound oxymoronic but is connected with being vulnerable – facing the truth about who we are, how we see others and avoid building walls that do not protect us but actually isolate us. Loosening this protection and becoming more naked, allows us to edge closer to our essential humanity and growing in our capacity to be fully ourselves by understanding what causes our fear about stepping into greater vulnerability; discovering an inner sense of safety; and securing support in inhabiting more authenticity and ultimately greater connection with others. It is not about reducing our fear but choosing to be vulnerable means changing our relationship with fear – less about reducing fear but going beyond it.

So far, Russian has not invaded Ukraine despite predictions by the USA and its allies that parrot its policy. It is difficult to ignore the hypocrisy vis-à-vis US foreign affairs.  We continually hear of violations of international law and ‘rules-based international order’ by other countries as put by Secretary of State Antony Blinken. He also lives with a very unfortunate name when we refer to hypocrisy. He has repeatedly blasted both Russia for threatening Ukraine and China for threatening Taiwan and its crackdown in Hong Kong. It is difficult to take these accusations seriously given nearly 8 years of bombing, rocket and drone attacks, and sending troops, against both ISIS and Syrian government troops and aircraft — even attacking and killing Russian troops who, unlike US troops, were in Syria at the request of the Syrian government. US military actions in Syria are completely outside of any ‘rules based international order.’ Crimes against peace have been committed in Vietnam, Laos, Cambodia, Yemen, Iraq, Lebanon, Syria, Somalia, Sudan, Haiti, the Dominican Republic, Nicaragua, El Salvador, Cuba, Niger, the Congo, Panama, Grenada and more. So, what is Blinken talking about when it comes to a rules-based order when the US and Australia make their own rules? Epic hypocrisy!! The blind leading the blind!!  Jesus questions us as individuals, groups and nations as to why we are so quick to perceive the flaws and failures of others - the things that cloud their vision: their pettiness, their pride, their politics - when we can so thoroughly fail to see what is ours to change. Australia repeatedly fails in this regard. Would we not do better to fix our own perception? This leads us to a failure to deal with contemporary troubles with anything but a narrow view and self-righteousness. It’s a failure to pursue humility. Jesus warns us about blindness and bad fruit. He calls people hypocrites who notice weaknesses or failures in others but are blind to their own. They lack awareness of their own shortcomings but decry the faults of others. This emerges when we see First Nations’ peoples through a particular lens where they are blamed for their problems as being ‘lazy’ without admitting to government failure and intergenerational trauma caused by colonisation. Blaming or fault-finding in the other takes the focus off one’s own deficiencies, failures and negligence. We see this in the case of people who are homeless, asylum seekers, poor families. It also helps one feel superior.

Pope Francis refers to the great illusion of disconnection that leads to meaninglessness and threatens peace. The call is to vulnerability and humility by drawing closer to God and coming together in dialogue to build a new world. As mentioned already, Sirach suggests that we speak less and listen more. Listening is an admission that we need to see through the eyes of the other as well as our own. This allows us to enter into the mystery that is around us, in Creation, in the other and in ourselves. It makes possible a greater care because we are listening to the ‘cry of the Earth’ and the ‘cry of the Poor’. What wonderful new possibilities!  In Fratelli Tutti, Pope Francis says that one of the perils we face today is that ‘the sense of belonging to a single human family is fading, and the dream of working together for justice and peace seems an outdated utopia. What reigns instead is a cool, comfortable and globalized indifference … concealed behind a deceptive illusion: thinking that we are all-powerful, while failing to realize that we are all in the same boat’ (#30) and ‘Unless we recover the shared passion to create a community of belonging and solidarity worthy of our time … the global illusion that misled us will collapse and leave many in the grip of anguish and emptiness’ (#36).

As we approach Lent, Jesus invites us to look for the goodness hidden in our hearts so that we may see the goodness in others and respect their own agency. Let us care for them and listen deeply to not only what they say but what they are trying to say. If we care for them, we will not impose our views, our plans, ideas, discipline, advice, correction, guidance and our judgment. If we care for them, we won’t jump at every opportunity to point out their blunders to make them feel foolish. If we care for them we will show them how beautiful, talented, capable, industrious, genuine, original, creative, skilled, friendly, trustworthy, resourceful, good and lovable persons they are. ‘Judge people from where they stand, not from where you stand.’ Only by relinquishing power, domination, ostentation and rising to humility, simplicity, servanthood can we renew our world and our church. As we approach Lent, may we commit ourselves to following Jesus in humility, powerlessness, and vulnerability. 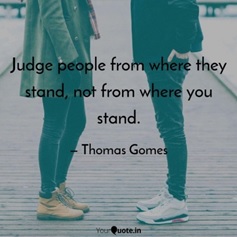