Fourth Sunday of the Year

Jesus gives us a glimpse into God’s heart through his preaching. The gospel and first reading reveal the sentiments of God’s heart towards people. The Beatitudes are a radical inaugural proclamation of Jesus’ ministry. They are fundamental, essential, and far-reaching as well as uncompromising, activist, and revolutionary. Many often try to tame the Beatitudes.  Nearly every time Jesus teaches or heals, the barbs emerge as even “good people” are angered and threatened by Jesus’ broad welcome for the so-called dregs of society and embodied the spaciousness of God’s reign rather than narrow human rules that judge people right and wrong. 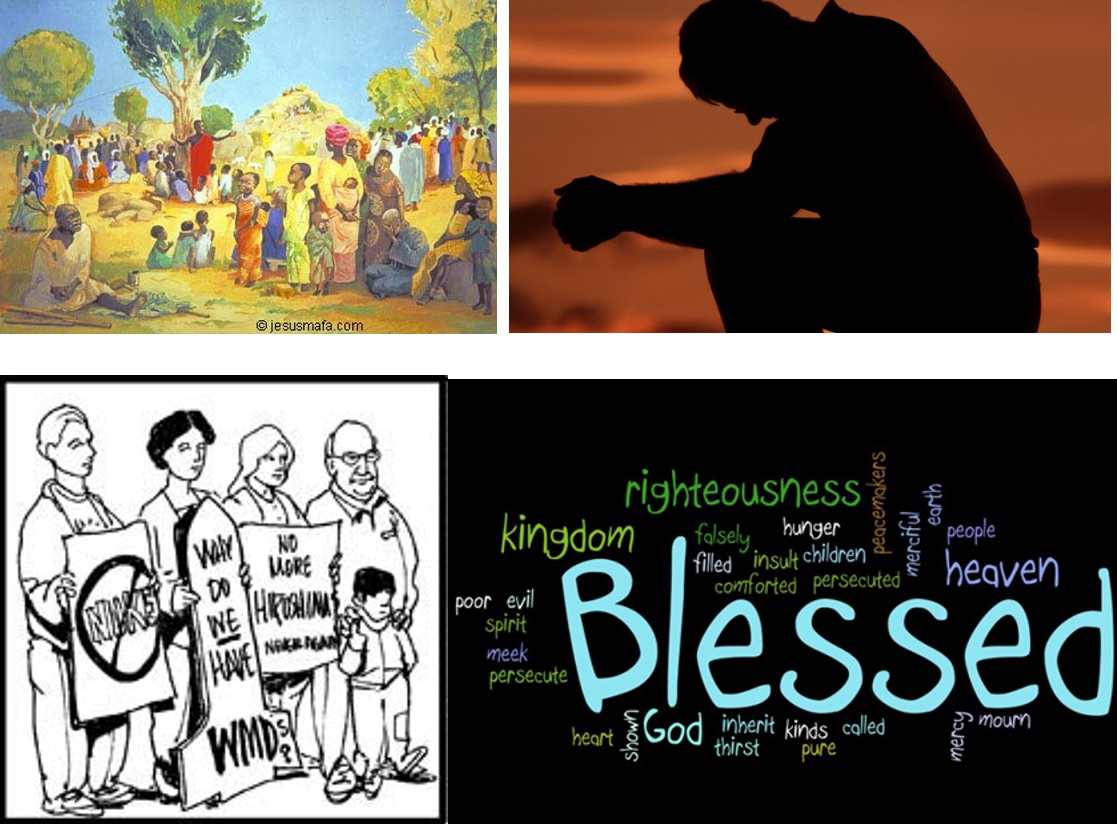 The readings remind us that God is found in the poorest, the weakest and the most vulnerable among us and in the world. We also encounter these daily if we see and hear. The Beatitudes cover several bases - the poor, the meek, the mourner, the peacemaker, etc.  Jesus speaks to them and calls them blessed despite the challenges they live with and opposition they face. These are proclamations of promise for all in need. They announce God’s reign of justice, love and peace for all people.

We might wonder if the disciples knew what they were called to be as they were surrounded by people in great need and Jesus stretching his arms towards people with broken bodies, broken hearts, and broken minds? Some amongst us might say that Jesus should say, “Blessed are the clean and prosperous, or the friendly and well-adjusted, or the rule-followers, or the organised and the hard-workers, or the strong, or those who worship regularly, or contribute to the church”? But, in these proclamations of promise, Jesus is present to people who are estranged, pushed to the edge and forgotten as are women in in Iran and Afghanistan. Through their protests, despite feelings of despair, pain, fear, memories of violence, concern, and incapacity, they are doing what is in the gospel challenge to ‘arise’ or ‘get up’ where they discover the hope and possibility they seek.

The non-Catholic lectionary reading includes a passage from Micah who speaks to people in a time, not unlike our own, of political turmoil and transition. He speaks to a sense of despair to an occupied people who wonder if anyone cares.  There is no attempt to silence the people’s complaints and concerns, but an affirmation of their right to rise up and voice their complaints and anxieties about the future. Micah and Zephaniah tell people to ‘rise up!’ which we see today in Iran, Peru, and Afghanistan. Micah called the people to remember God’s faithfulness and that God walks among them through leaders and prophets. This faithfulness is evident wherever people put their voices and bodies on the line for justice. Zephaniah calls on the humble of the earth, those among us who are disenfranchised, not to embrace humiliation and the feeling of powerlessness.  He is clearing stating what God wants: to seek a justice that reflects God’s heart and passion where human society is re-shaped with practical consequences for both the powerful and the powerless.

The Beatitudes make some people cringe as their comfort is disturbed. We are reminded that our interconnectedness with God, all living creatures and creation cannot be based on platitudes and dreams. It means we must look to see who is left out. Here worship and justice cannot be separated.  Where our cultures celebrate wealth and economic and military power, Jesus blesses and life up those on the opposite end of that spectrum.  This is reinforced by Paul - that God’s favour rests with and empowers those having no status and prestige. Competition and conflict continue to weaken, and even destroy, the bonds of human relationships. Those jockeying for position in the global market to create economic empires of power, prestige and control, leave many people disenfranchised.

We encounter God by following different values, different interactions with others and different ways of presence in the world. We encounter God in the least and most vulnerable in our world. They are blessed, not because they are happy or esteemed, but because God is near them in a unique way. We may think we have nothing to learn from the ‘other’ but Jesus was always going outside of his community and his comfort zone.

We are called away from a spirituality that separates worship and social action in the hope for some  ‘evacuation’ to another world without suffering and death. Worship should take us into lives of justice and transformation where God is encountered in the least and most vulnerable.  American pastor, Brian McLaren, dismisses this ‘evacuation theology’ that sees this life as a ‘testing ground for another, better world.’ This view can justify hating and killing people with different beliefs. It makes sense of treating women, gay and lesbian people, the poor, the sick, the homeless, the stranger as less than human. It also legitimatises abuse the planet. As we revisit the Gospel, we find that God is found in our work for justice, in our care for the least and in our opposition to violence, destruction, materialism, greed, and power.

The Beatitudes are snapshots of people of God’s Reign from different angles. Through the centuries, those who have voiced serious doubts about the feasibility of living in response to these radical statements have been as numerous, and perhaps even louder and more convincing in their logic, than those who surrender to the paradox of Christ’s challenges and attempt to live according to them as with Tolstoy, Francis of Assisi, Gandhi and Dietrich Bonhoeffer who understood today’s gospel as containing the central tenets of the Christian faith. Others claim that they are hyperbole and can only be taken seriously when modified or toned down. Nowhere does Jesus more clearly set forth his mind and heart than in the blessings he pronounces in this Gospel.

Love-making and justice-making take us beyond ourselves whereas a society based on power, success and materialism closes in on itself. We see where God’s heart and passion lay. The direction of God’s gaze and concern is toward those we may not notice or attend to. God notices the poor, the left behind people; the people who yearn for and attempt to change the world. Do we notice?

How can have a church where certain groups of people feel excluded? How can we have a country based on the fair go if people feel excluded because of their social status, social abilities, race, gender or religion? To hunger and thirst for justice – means doing it. And Jesus’ ‘blessed’ is an encouragement to those who do seek justice, work for peace. We make that happen when we make kindness a lifestyle, by talking to people who have hurt us, not avoiding people or isolating them. It is not enough to admire justice; we must work for it. If we want peace, we must work for it rather than just contemplate it. If we want peace we need to continue build bridges where others build walls. It is impossible to care only about our own community without seeking to reach out to those beyond it.

We are called to get our hands dirty, to build a humane society where people will not be abused and tortured, where voiceless find their voices and are heard, where the powerless are lifted up and stand in dignity. So, when Jesus says ‘blessed’ he is saying both ‘congratulations’ and ‘keep at it’. The congratulations and encouragement is there when we struggle to do what is right, what is just and stand with those who grieve. He urges us to get up and do something.

We can also encourage and congratulate those amongst us who are tireless partners with God and others to create a more human world.

No one has a right to sit down and feel hopeless. There is too much work to do.