Twenty First Sunday of the Year

Mount Rushmore has images of four former US presidents carved out. Recently, Donald Trump has allegedly suggested that his image should also be carved out into the mountain because of his contribution to the nation!!  Caesarea Philippi, on a massive wall of rock, has a marble temple built to honour Caesar. It is here that Jesus brings his disciples to ask possible one of the most important questions in the gospels. At this place of imperial power and authority, it is difficult to miss the political nature of Jesus’ question: ‘Who do you say I am?’

It flows from prior political question: ‘Who do people say that I am?’ This question comes down to asking who has taken the strongest stand against Israel’s oppressors. The obvious heroes mentioned are Elijah, Jeremiah and the imprisoned John the Baptist. Then, Jesus sets an anti-imperial tone, when he asks, ‘What about me? Who do you say that I am?’ It is a central question to anyone who follows Jesus. Isaiah shows God interest in politics, oppression and the liberation where one leader is told to step down in favour of another. This theme continues in the responsorial psalm as we sing ‘Forsake not the work of your hands.’ The emphasis on God’s hands is a reminder of God’s commitment to this world-especially the world’s non-white poor, people living in ghettos, hiding from bombs and other examples of injustice. The psalm also praises God’s kindness, truthfulness, encouragement of the weak, care for the poor - again all connected with life here and now.

Son of Man (the Human One), Son of God, and Christ are all politically loaded titles in favour of the poor over the privileged and powerful. ‘Who is the Son of Man in history and for us today?’ Our response will determine the kind of path we will take in a world filled with Charlottlesvilles, which we commemorate again this week, Yemens, Beiruts, and militarised police. Our answer determines whose side we are on – that of those in power and control or the innocent victims of these abuses. This recognition moves Peter from engaging the mind to engaging a person, a relationship, a commitment and responsibility.

Jesus’ encouragement to Peter suggests that the ultimate decision-makers are poor people like the fisherman, Peter, and like other followers – the beggars, prostitutes, and victims of Roman imperialism or present day victims. It’s what they decide — what they bind on earth — that reflects God’s divine order. History is on their side, not on those who seem invincible. 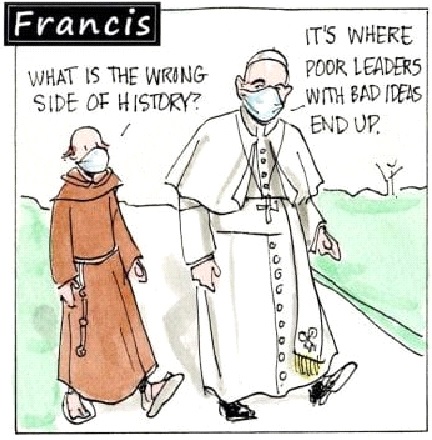 Pope Francis continually challenges us to look at ourselves and each other in new ways: with the eyes of mercy and not of power. Peter’s response is akin to what Nadia Bolz-Weber writes in Pastrix: ‘I am not the only one who sees the underside and God at the same time. There are lots of us, and we are at home in the biblical stories of antiheroes and people who don't get it; beloved prostitutes and rough fishermen...It was here in the midst of my own community of underside dwellers that I couldn't help but begin to the Gospel, the life-changing reality that God is not far off, but here among the brokenness of our lives. And having seen it, I couldn't help but point it out.’ Peter becomes a rock of creative transformation where Jesus’ church needs to constantly grow, change and find new and more creative ways of being God’s people in the world.

Our response to Jesus’ question changes as we grow and experience more and more of life. It expands as we see the ‘otherness’ in the person we fall in love with, the children we have, the parents we care for, witness the sufferings of Christ’s body in people everywhere and as we have seen in Afghanistan, Syria and Iraq, the conflicts in Nigeria and other parts of Africa, and famine in South Sudan and remember Hiroshima and Nagasaki, the pain and suffering of the Palestinian people and the ongoing trauma of our First Peoples. More and more we are aware of the continuing ‘slavery’ and trafficking of persons around the world for pleasure or profit. These are the faces of Christ for us. ‘Who do you say that I am?’ We also see that face in people such as Dorothy Day, Father Daniel Berrigan, Philip Berrigan and their supporters, who challenged the US war machine and preached non-violent resistance to it; in in people such as Martin Luther King or Charles Perkins and supporters who challenged inequality, racism in the USA and Australia; and in Archbishop Oscar Romero who stood with his priests and the suffering people of El Salvador against military oppression. What face of Christ do these present to us? These reflected a leadership that that authored life in people and opened doors for them and made Christianity credible. This gospel is enabling us to recognise and celebrate other disciples, past and present, who are authorities in faith for us. They may not be in positions of authority but are individuals whose lives attested to Jesus as the Christ, son of the living God. Peter is declared the rock and foundation of the church not because of who he is, or because of any particular skills he has, or degrees he’s earned, and certainly not because he is a male. He is made the rock because he recognises who Jesus truly is. That is the foundation of his authority. This is not based on status, ordination, academic degrees, gender but an authority based on intimate, lived familiarity with the Gospel.

We saw Isaiah confront anyone in leadership with the kind of leadership that God requires: a leadership that stands with and supports people, e.g., ensuring the availability of food, health and education for people rather than the dubious security of trafficking in weapons and selling them to poor countries where education, health and social cohesion are mortgaged to pay for these arms? Might it not be possible for religious leaders to stop teaching for a while and just listen and engage with their people to understand the concerns their hearts and lives?

We cannot allow the readings to sidetrack us into control and domination. Our little schemes often have nothing to do nothing to do with building up the church excerpt to increase property, build another monument, embark on the next ‘spectacular’ or acquire the next lot of beautiful vestments!!

When Jesus says that the powers of death will not prevail, we think in defensive terms where we are under attack from atheists, secularists, radical theologians, strident women or the gay community. Instead, Jesus sees the church as engaged in a positive engagement with everything that is not life-giving for God’s people.

For Jesus, the keys to the reign of God/heaven were to be keys of liberation – not to lock people out. They are gifts to free people from their prisons, closets, and the traps we set for one another. They are the gifts to empower the least among us. Ministering to others is not about judgment but a reminder that God’s merciful deliverance has no limits. Peter stands for each of us. When Jesus say, ‘You are rock, and on this rock I build my church’ he is referring to our faith in action when expressed in service, love, care and nurturance, forgiveness and reconciliation that builds up the church.

We can have our bright or stellar moments as well as our darker moments. Of greater importance is that we recognise and tend Christ really present in the poor; that we speak out against injustice and translate our words into action; that we give ourselves to help, listen, serve and befriend another; that we listen for that gentle but insistent word in moments of quiet and prayer; to put the needs of others ahead of our own needs or the wants of the rich and powerful.

This new community is to be about life, about justice and right relationships. The church is meant to bring this about…not just talk about it. But it is the spirit of Jesus that can create within each of us a passion for justice that will shake up our certainties, our privileges and our self-interests, if we allow it. Jesus can construct within each of us a tenderness that puts our pettiness to shame, and an experience of freedom that will release us from all our enslavements. But only if we allow it. We cannot truly confess Jesus to be ‘Lord’ if we turn our backs on the project of forgiveness, mercy, tenderness, justice; if our backs are turned to the real people, the image of Christ, in our midst and in other parts of the world, that cry out to us for peace, freedom, justice, life itself. Will we face the wall of Caesarea Philippi and honestly answer this single Gospel question: ‘Who do you say I am?’ How will we answer?