We've put together a list of great gift ideas for children that explore themes of social justice and human rights in simple, yet very powerful ways. These books should be available online (via sites such as Book Depository) or in most good book stores.

I'm Australian Too by Mem Fox - I’m Australian! How about you? Many people from many places have come across the seas, to make Australia their home. How Australian is that? From countries near and far, many have made their home in Australia, sharing it with the original inhabitants, and living in peace beneath the Southern Star. Mem Fox celebrates Australia's incredible multicultural heritage in this beautiful book illustrated by Ronojoy Ghosh.

Say Yes: a story of friendship, fairness and a vote for hope by Jennifer Castles illustrations by Paul Seden - Once there were two little girls who were best friends. They did everything together. As they got older they weren't allowed to do the same things anymore. Because they looked different. Because of the law. This is a story about the landmark 1967 Referendum, the two women who came together to change the law ... and how the Australian people said YES. 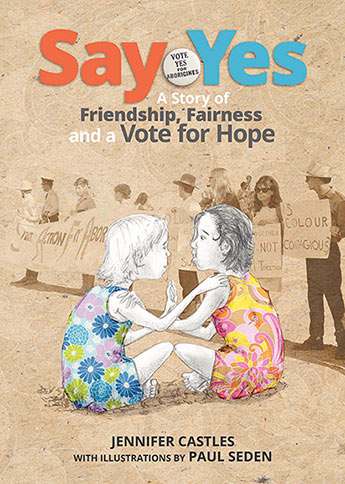 Goodnight Stories for Little Girls by Elena Favilli - What if the princess didn't marry Prince Charming but instead went on to be an astronaut? What if the jealous step sisters were supportive and kind? And what if the queen was the one really in charge of the kingdom? Illustrated by sixty female artists from every corner of the globe, Good Night Stories for Rebel Girls introduces us to one hundred remarkable women and their extraordinary lives, from Ada Lovelace to Malala, Amelia Earhart to Michelle Obama. Empowering, moving and inspirational, these are true fairy tales for heroines who definitely don'tneed rescuing.

The Arrival by Shaun Tan - A spectacular book-without-words that traces one family’s immigration story with brilliant imagination. In an unnamed troubled land, a man leaves his wife and young daughter behind in search of freedom in a new country. His adjustments are initially overwhelming and disorienting, but with the help of new friends, he slowly finds his way and is eventually reunited with his family.

Ships in the Field Susanne Gervay illustrated by Anna Pignataro - In a unique collaboration, Susanne and Anna have created a moving and significant picture book, 'Ships in the Field'. It crosses boundaries in a universal recognition that children are part of the journey of war, migration, loss and healing. Through warmth, humour, pathos and story within story, it breaks the silence, engaging children, families and community.

The Little Refugee Anh Do and Suzanne Do illustrated by Bruce Whatley - Anh Do's inspirational story about his family's incredible escape from war-torn Vietnam and his childhood in Australia, told especially for children. We Are All Born Free: The Universal Declaration of Human Rights in Pictures Ali the Bold Heart Jane Jolly illustrated by Elise Hurst - The Universal Declaration of Human Rights was signed on 10 December 1948. It was compiled after World War II to declare and protect the rights of all people from all countries. This beautiful collection, published 60 years on, celebrates each declaration with an illustration by an internationally-renowned artist or illustrator and is the perfect gift for children and adults alike.

Refugees David Miller - A small green swamp just past the edge of town is home to two wild blue-billed ducks. But one day huge, rumbling, grumbling machines crawled, scraping and gouging towards the swamp and out poured the swamp's precious water. Refugees tells the story of the duck's misadventures in trying to find a new place to live.

Flight Nadia Wheatley illustrated by Armin Greder - Under the cover of darkness, a small family takes flight in search of a new home. At first it could be happening thousands of years ago, but as the travellers make their way through the wilderness, the unseen dangers are suddenly transformed into the kind of images that are only too familiar from contemporary scenes of war.